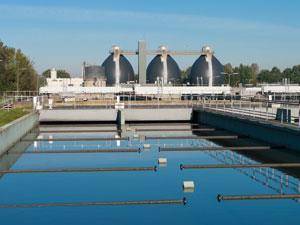 German researchers have developed an efficient and environmentally friendly process to recover phosphate from wastewater for use in fertiliser. The electrochemical process, which is currently being tested in a mobile pilot plant, could contribute towards a sustainable future for agricultural phosphorus use.

Phosphorus is essential for all living organisms. As a result, it is applied to agricultural fields across the world in the form of a phosphate fertiliser. However, the world's main source of phosphorus – phosphate rock – is becoming increasingly scarce and expensive due to high global demand for fertiliser. The knock-on effect is increasing food prices and food insecurity.

Paradoxically, as the world's finite reserves of phosphate rock diminish, there is a continuing trend for food producers to over-fertilise land. What's more, large quantities of phosphorus, excreted by humans, is lost in wastewater treatment plants due to their chemical removal with iron and aluminium salts that cannot be used as fertilisers.

Some measures already exist to recover phosphorus from wastewater in the form of a phosphate salt called struvite (magnesium–ammonium phosphate). However, these approaches require the addition of a base, to raise the pH, and magnesium-based chemicals as precipitating agents, increasing costs.

Researchers at the Fraunhofer Institute for Interfacial Engineering and Biotechnology IGB, in Stuttgart, Germany, have developed an electrochemical process to obtain struvite from wastewater without the need to add any chemicals. Instead, the required magnesium is added via a magnesium electrode, which is highly reactive and therefore requires very little energy.

The pilot system has a 2m high electrolytic cell through which the wastewater is directed. With a sacrificial magnesium anode and a metallic cathode, the electrolytic process splits the water molecules into negatively charged hydroxyl ions at the cathode. At the anode the magnesium ions migrate through the water and react with the phosphate and ammonium molecules in the solution to form struvite. This has the advantage that it can be used as fertiliser without further processing.

'As our process has a very low energy consumption - 70 watt hours per cubic metre of wastewater - its efficiency is dependent on the nutrient (P, N) concentrations in the treated material,’ explains Daniel Frank who works on the project. 'The higher the concentration, the more efficient our process is.'

'In order to feed 9 billion people by 2050 we will need to recover phosphorus from all sources of organic waste  – including human excreta and wastewater,' says Dana Cordell who researches phosphorus sustainability at the University of Technology, Sydney, Australia. 'While there is no one-fit solution for all contexts and countries, recovering phosphorus from wastewater in the form of struvite offers significant benefits because it is pure, can be applied directly to agricultural soil as a slow-release fertiliser, has a high phosphorus concentration and can therefore be transported large distances.'