A molecule that can insert into cell membranes and change its fluorescence according to their tension has been developed by researchers in Switzerland. The research has already led to new insights into membrane dynamics.

Cells actively regulate the tension of their membranes as it is crucial to numerous process such as ingestion of particles and division. But measuring this tension in living cells can be difficult or impossible, so gaps remain in biologists’ understanding.

Lipid membranes can only stretch by around 8% before breaking, and measuring this tension is tricky. ‘Current methods are mechanical: you locally apply a force and you see the response of the membrane,’ explains biochemist Aurélien Roux of the University of Geneva. Such techniques are extremely challenging, however, and can only measure the tension at one point at a time. 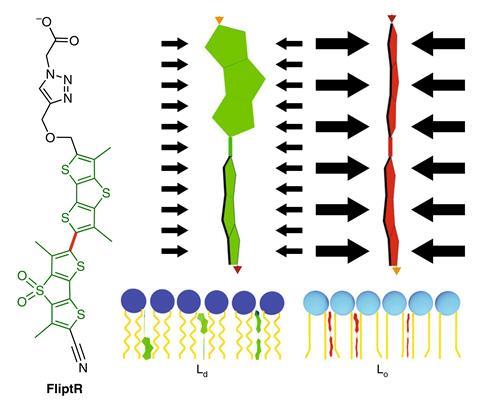 Roux’s group collaborated with supramolecular chemist Stefan Matile (also at Geneva) to design a molecular probe they have called FliptR (fluorescent lipid tension reporter). In solution, the molecule’s fluorescence is quenched, preventing background fluorescence. When the molecule inserts into a cell membrane, it becomes fluorescent. In theory, if a lipid membrane is not under tension, the lipids should pack tightly together, flattening the FliptR molecule into a planar conformation with a high fluorescence lifetime. When the membrane is stretched, the lipids should become more disordered, allowing the FliptR to twist into a conformation that is sterically more favourable, but has shorter average fluorescence lifetime. When the researchers tested the molecule on artificial membranes comprising only one type of lipid, this was what they found.

But when they tested the molecule on two different types of real cell membranes, the fluorescence lifetime actually increased when the membrane was under tension. The researchers were puzzled until they discovered recent work suggesting that tension can induce membranes to separate into ordered and disordered areas. They concluded that the increased fluorescence lifetime was due to the FliptR molecule entering the ordered lipid phase, while the disordered lipid phase stretches. ‘I find it really impressive that, having this probe available to image the tension in cells, we immediately find new behaviour,’ says Matile. ‘It looks like this behaviour is the same in all cells – applying tension causes lipid reorganisation and forms domains. The biological significance of this should, I suspect, be very high.’

‘This is the first molecule that proposes to allow visualisation of tension in a lipid bilayer: that’s really a breakthrough,’ says quantitative cell biologist Matthieu Piel of the Curie Institute in Paris, France. ‘They also show that there are some limits to how you can use this sensor, but because it’s the first one I guess that’s not really surprising. It will probably lead to improvements that can be used in more contexts.’