Two metals are better than one

UK chemists have developed reagents that can metallate ethers and ethene at room temperature without them disintegrating. Using combinations of zinc and alkali metals the team made stable, crystalline complexes with carbon-zinc bonds that can then be used in further reactions. The work provides insight into the fundamentals of metallation chemistry and could provide a useful and safer alternative to aggressive organolithium reagents.

One of the classic ways of coaxing organic molecules to react is to replace an inert C-H bond with a reactive carbon-metal bond, and then react that with a suitable partner molecule. Robert Mulvey from the University of Strathclyde, UK, explains that this is most often done using organolithium bases, but that the resulting compounds are extremely reactive and prone to falling apart unless the reactions are carried out at very low temperature.

’Organolithium reagents are very aggressive, and tend to be incompatible with a lot of common functional groups, including ethers,’ says Mulvey. He explains that cyclic ethers such as tetrahydrofuran (THF) decompose very readily when reacted with lithium reagents, so finding a way to stabilise metallated ether rings should open up a wealth of new synthetic chemistry. 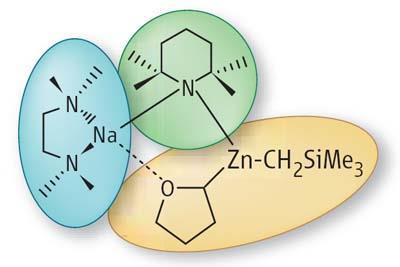 One way to make more stable metallated compounds is to use less polar metals such as zinc, Mulvey points out, but zinc compounds are often not strong enough bases to metallate compounds directly. ’What we’ve found,’ he adds, ’is that if you mix zinc compounds with alkali metals, it greatly enhances their metallating ability, but it is still the zinc that does the deprotonation.’

This means that, rather than reactive lithium compounds, the team forms molecules with strong Zn-C bonds, with the alkali metal playing an ancillary role in stabilising the complexes. The compounds are stable at room temperature and can even be crystallised and isolated, yet still react in the same way as their lithium counterparts.

Paul Knochel from Ludwig Maximilians University of Munich, Germany, explains that the ability to characterise and study the metallated structures in detail is an important advance. ’The results themselves are remarkable,’ he adds, ’but the unambiguous x-ray characterisation is also very useful as it can be used to understand, elaborate and design new, even more efficient bases.’

Mulvey’s group has attempted preliminary tests of their metallated ethers in addition reactions with acyl chlorides and met with mixed success, but Mulvey points out that such reactions can be strongly affected by the reaction conditions. ’We’re going to look at a whole range of different [addition reaction conditions],’ he says, adding that a further advantage of metallating with zinc is that it allows them to consider Negishi-style palladium cross-coupling reactions, which are not possible with organolithium species.