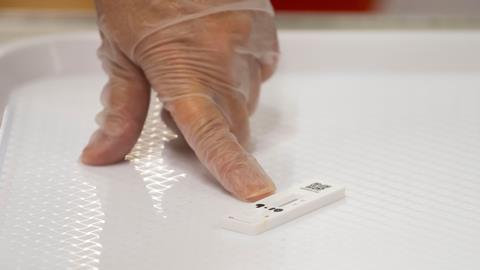 A new study of a government-backed antibody test that establishes whether a person has ever had Covid-19 doesn’t perform as well as its developer’s claim, a study has found. The government now faces legal proceedings for failing to evaluate evidence of the test’s accuracy, as well as for awarding a £75 million contract without open tender.

The AbC-19 test detects IgG antibodies to Sars-CoV-2 spike proteins from a drop of blood. Based on lateral flow detection technology, it takes around 20 minutes to get a result. The York-based company behind the test is Abingdon Health, part of the UK Rapid Testing Consortium (UK RTC) that was assembled in April.

Abingdon says an ‘extensive validation study’ found the test to have 97.7% sensitivity and 100% specificity. Sensitivity is a measure, in this case, of the test’s ability to correctly identify those with the antibody of interest, while specificity is the correct identification of those without the antibody. The Ulster University study is a preprint, meaning it has not been peer reviewed yet, and was funded by RTC members. It involved tests on around 1000 samples with a known infection status.

However, the new Public Health England (PHE) study used larger sample numbers taken from key workers, where it was mostly unknown whether they had been infected or not. When using known positive and negative samples, the study found the test to have 92.5% sensitivity and 97.9% specificity. These rates fell when unknown samples were tested. ‘If one million key workers were tested with AbC-19 and 10% had been previously infected, the probability that a positive result was correct would be 81.7%,’ the authors write. So in a typical real-world setting, it would miss around one in five cases.

‘One reason why the researchers in the new study got lower estimates of sensitivity and specificity than those in the previous study is “spectrum bias”,’ explains Kevin McConway, emeritus professor of applied statistics, The Open University. ‘In this particular context, it seems to have arisen because the researchers on the previous study perhaps didn’t test enough borderline cases – that is, people in which the level of the substance measured in the test is close to the cut-off value that distinguishes the positive test results from the negative ones.’ This could make the test appear more accurate than it actually is.

According to leaked emails seen by the Good Law Project, a non-profit legal organisation, and the British Medical Journal, the Department of Health and Social Care (DHSC) knew about the PHE findings in October, when it confirmed a £75 million contract to Abingdon for one million tests for surveillance studies. But the DHSC decided not to reveal the findings even though PHE staff warned of the ‘significant risks’ of not publishing the results.

The Good Law Project claims the government acted unlawfully. ‘The £75 million contract was awarded without competition and on the basis of profoundly flawed research,’ the organisation said. ‘When confronted with evidence of the flaws, the government blocked PHE from publishing the findings until after they could make the announcement that they had purchased one million antibody tests.’

The DHSC denies blocking publication. ‘This robust evaluation was carried out by PHE at the department’s request before any purchase was made, and PHE approved the test for use in surveillance studies,’ the DHSC said in a statement ‘Due to the urgency of the situation there was no time to run an accelerated procurement under the open, restricted or competitive procedures as there was an urgent requirement to ensure provision of diagnostic equipment.’

‘At a time when reliable, effective testing is vital, and the government is proposing to spend millions on novel tests, it is hugely important that independent assessment is available prior to purchasing,’ comments Sylvia Richardson, Royal Statistical Society president-elect. ‘More transparency would help the government implement a cost-effective testing strategy.’

Conway is also concerned about the potential of false positives in a community setting when hundreds of thousands of people are tested. ‘The implications could be serious if someone is going to consider people who tested positive as being, temporarily at least, immune from further infections.’