A protein ‘nanoreactor’ that can monitor a click chemistry reaction at the level of single molecules has been created by adding an unnatural amino acid to a nanopore. The UK researchers behind the nanoreactor say it could be adapted to follow and learn about many other types of chemical reaction. 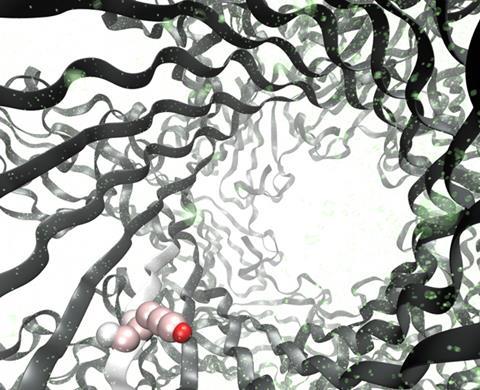 Using their nanoreactor, the researchers revealed a long-lived intermediate in a reaction between an azide and

The research builds on previous work by Hagan Bayley’s group at Oxford University in the UK, using protein pores spanning a lipid bilayer to track single molecule reactions by measuring the current produced across them. ‘[So far] this has really been limited to thiols … because we can put a single cysteine residue into our pore, and the side chain of cysteine contains a thiol group,’ says Bayley. In order to study other reactions, Bayley and colleague Joongoo Lee had to change the nature of the reactive side chain by incorporating an unnatural amino acid residue into the protein.

To build the new protein pore, the central part of the polypeptide chain containing the unnatural amino acid had to be chemically synthesised, while the surrounding sections were manufactured by bacteria. The parts were then joined together and folded into the overall 3D structure, to make a pore with an alkyne-containing side chain extending into the channel, in place of the usual thiol group. Bayley and Lee were then able to use the pore to monitor a classic click chemistry reaction, in which an azide reacts with an alkyne in the presence of a copper(I) catalyst to form a triazole.

‘The mechanism of this reaction is very controversial, but the one thing we could show is that there is a long lived intermediate in this reaction that lasts for about five seconds,’ says Bayley. ‘This is a concrete result that anyone who formulates a reaction mechanism for this reaction has to take into account.’

And there are many more reactions that could be given similar treatment, Bayley says, now that the procedure has been shown to work. ‘The ability to place an unnatural amino acid in a pore opens up the approach to a wide range of functional groups, including ketones, aldehydes, alkenes, dienes, alkynes and many more,’ he says. ‘We are especially interested in using the new chemistry for molecular walkers: molecules that move step-by-step along an engineered track within the protein pore.’

The group are even investigating the possibility of placing multiple reactive side chains within a single pore, and using the pores for catalysis. ‘We’d like to put clusters of functional groups into the protein just as you would find at the active site of an enzyme,’ says Bayley. ‘So then we cannot just look at chemical reactions but see if they can catalyse [them].’

Michael Meyer from the University of Fribourg in Switzerland, who has also worked with nanopores, said the experiment was ‘beautifully performed’. ‘It’s not always the case that you then have an example where a real advantage [of single-molecule observations] is obvious. Here, it’s a very important reaction and we have direct evidence for a long-lived intermediate that you wouldn’t be able to see in a normal chemical reaction in an ensemble batch.’ He adds that the technique could take the field in ‘exciting new directions’ in future.