US academics freed from waste worries

US chemistry laboratories have been freed from regulations on handling hazardous waste that lumped them under the same rules as industrial facilities.

After more than two decades of discussion, the Environmental Protection Agency (EPA) issued a final rule on 1 December that provides universities, and affiliated teaching hospitals or research institutes, with a more ’flexible and protective’ optional alternative for managing the hazardous waste produced by campus labs. 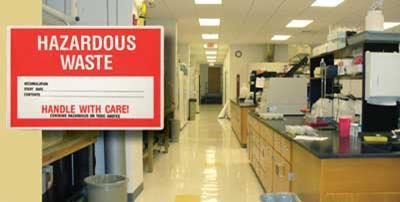 Would you know what to do with it?

The rule adds leeway to the current regulations, which EPA acknowledges were more appropriate for an industrial setting. Under the old system, determinations on what counts as hazardous waste must be made at the point of generation - which for universities is the lab. But most researchers in US academic labs haven’t been trained to national requirements for managing hazardous waste (under the US Resource Conservation and Recovery Act). As a result, many err on the side of caution and label too much waste as hazardous.

The new rule is intended to make this system more efficient. It allows decisions on hazardous waste to be taken in the lab, at a central waste accumulation area on campus, or later at the treatment, storage or disposal facility.

’We are thrilled that EPA has acknowledged that an academic lab environment is different and needs to be regulated differently,’ says Robin Izzo, an official with the US Campus Safety, Health, and Environmental Management Association who also serves as Princeton University’s associate director for laboratory and environmental health safety.

Academic labs have different hazardous waste generation patterns than do typical industry facilities - with the former generally producing relatively small amounts of many different types of chemical waste, and the latter producing more consistent and larger volumes of fewer kinds if waste.

The alternative rule also encourages university labs to remove unneeded or expired chemicals by allowing monthly laboratory clean-outs during which the hazardous waste accumulated is not counted for regulatory purposes. And to cut down waste, it allows health and safety officers to decide if chemicals generated in one laboratory can be re-used in another site on a facility.

Don’t throw it down the sink

’This clearly will help colleges and universities to manage their waste more effectively,’ says Russ Phifer, who chairs the chemical safety committee of the American Chemical Society, which endorses EPA’s rule.

Boston University’s chemistry safety officer, Richard Laursen, agrees. ’Getting rid of stuff around here is a problem,’ he tells Chemistry World  . ’We are complying with the same regulations as big chemical companies and we also have our own [state] rules in the Boston area - we can’t put anything down the sink anymore.’

The EPA rules will trump those at the state level, though they will have to be adopted by individual states - a process that is unlikely to occur before February, and could take a year or more.

Despite their appeal, the optional regulations do contain some provisions that are more onerous than the existing rules. For example, there is a new requirement for institutions to develop a comprehensive lab management plan describing how they will handle their stored chemical materials.

The regulations also oblige labs to discard all ’unwanted material’ within six months of accumulation, so lab workers are required to date all chemical containers.

In the UK, the Hazardous Waste Regulations of 2005 apply to university research laboratories, just as they do to other hazardous waste producers. However, academic chemistry labs may be exempted from having to register as an official hazardous waste producer if they generate less than 200kg of hazardous waste annually - though there are still rules to follow about waste disposal, notes Stuart Brennan from the UK Environment Agency.