Plans are in motion to supply US ships and planes with alternative fuels, but the move faces stiff opposition from some politicians 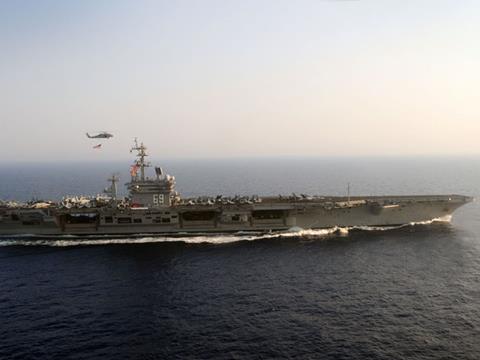 The US Navy has joined with the energy and agriculture departments to commission private companies to build multiple commercial-scale biofuel refinery plants to supply its ships and planes. They say the effort will enhance the US’s security and economy, but not everyone agrees.

The three departments will put up $30 million (£19.3 million) to match private investments in ‘commercial-scale advanced drop-in biofuels’. The refineries will supply fuels with equal or lower greenhouse gas emissions than conventional fuels.

Additional funding requests will be made to Congress to support the initiative, including President Obama’s fiscal year (FY) 2013 budget request of $110 million. Awardees will be selected in the autumn and the second phase will begin sometime next year. Last June, the US Navy, Department of Energy (DOE) and Department of Agriculture (USDA) each agreed to contribute $170 million to pursue biofuel development, with more than $1 billion coming from industry.

The navy uses 30 million barrels of fuel each year to keep 285 ships and 3700 aircraft running. But because the conventional fuels market is volatile, it is looking for competitively priced alternatives. ‘Every dollar increase in price per barrel of fuel translates to a $30 million unplanned bill for the navy,’ says Tom Hicks, deputy assistant secretary, US Navy.

After the new fiscal year began in September, the conventional fuel price instability caused a billion dollar increase in the navy’s fuel bill. ‘We are very interested in seeing a domestic alternative fuels market stand up in this country that is competitive with petroleum,’ Hicks states.

The navy won’t reveal details about what feedstock these biofuels refineries would run on. However, to date it has tested camelina – a mustard seed variant – to fly its F18 fighter jet. It has also pursued algal oils, as well as a combination of agricultural waste oils and algal oils in a 50:50 mix with conventional fuels.

Hicks says other promising feedstocks include municipal solid waste, as well as energy cane, which is related to sugar cane but does not compete with it on the market. The ultimate goal is to have half of the navy’s fuel come from alternative sources by 2020, he says.

But the agency’s move toward biofuels is causing concern on Capitol Hill and elsewhere. Matt Dempsey, spokesman for the top Republican on the senate environment and public works committee – Senator James Inhofe – expresses unease about the Pentagon’s spending on alternative fuels.

The navy’s ‘green fleet’ runs on a 50:50 blend of alternative and conventional fuels that costs $26 per gallon. Dempsey calls that the price tag ‘outrageous’. In fact, both chambers of Congress have added language to their defence authorisation bills specifying that alternative fuels used by the Pentagon can be no more expensive than traditional fuels.

The American Fuel & Petrochemical Manufacturers is also on the attack. ‘The proposal to spend almost half a billion dollars to help build biorefineries that will produce extremely expensive fuel is just the latest example of this administration’s anti-fossil fuel agenda,’ said the group’s president, Charles Drevna.

Meanwhile, the US Biotechnology Industry Organization (BIO) praised the navy’s decision to support the emergence of viable, cost-competitive alternatives to foreign oil. The group’s executive vice president, Brent Erickson, said that petroleum refinery industry groups are voicing opposition because they trying to ‘prevent the emergence of competitors within their highly protected and favoured markets’.