The US National Research Council (NRC) is urging its government to act immediately to reduce greenhouse gas emissions and develop a national strategy for adapting to the impacts of global warming.

NRC, which is the operating arm of the US National Academies, made the plea on 19 May, when it released the first three of five reports requested by Congress more than two years ago to analyse the climate change situation. 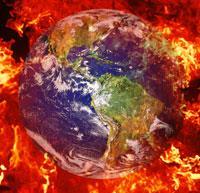 Action is needed to reduce the impact of climate change

’Climate change is occurring, is caused largely by human activities, and poses significant risks for - and in many cases is already affecting - a broad range of human and natural systems,’ the first of the reports concludes.

The report suggests that a revolution is needed in how climate change research is supported, organised and conducted in the US. It recommends that a single federal interagency programme or other entity, like the US Global Change Research Program, should be given the authority and resources to coordinate and implement a comprehensive, integrated national climate change research effort.

The second report proposes that the US establish a measurable domestic greenhouse gas (GHG) emissions budget in the range of 170 to 200 gigatons of CO2-equivalent for the period 2012 through 2050. NRC notes that there are several ongoing efforts to limit greenhouse gases across the US, but what is lacking is a framework of national goals and polices to help coordinate and expand these scattered initiatives.

The third report calls on the government to develop a national adaptation strategy that reduces vulnerabilities to the impacts of climate change. As part of this framework, NRC suggests that the federal government provide technical and scientific resources that are missing at the local or regional scale, and support scientific research to expand knowledge of impacts and adaptation.

Bob Peoples, who heads the American Chemical Society’s Green Chemistry Institute but spoke to Chemistry World independently as a chemist, agrees with  the NRC that harmonisation of the US approach to climate change is urgently needed.

’It is really critical that we have some kind of a national strategy and policy going forward, because industry needs stability and guidance in making the business decisions about technology development,’ he says.

Peoples notes that there are currently too many dispersed rules representing a patchwork of requirements and regulations that are difficult to satisfy. ’There is a huge infrastructure in place in energy, transportation, and chemical manufacturing - trillions of dollars in capital - and industry wants to know that green chemistry and engineering solutions will be viable.’

NRC is expected to release its final two reports on climate change later this year. One will address how best to inform effective policy decisions related to global warming, and the other will build on the previous reports to provide a scientific framework for shaping the policy choices underlying US efforts to tackle climate change.