Scientists in China have developed an absorbent material made from waste eggshell membrane that can remove Cr(VI) from contaminated water.

Chromium is usually found in water systems in two main states: Cr(III) and Cr(VI). But, while Cr(III) is needed for metabolism, Cr(VI) is highly toxic and carcinogenic to living organisms, and unfortunately, this form is highly mobile.

This ability to move quickly in a system means that developing an efficient and cost effective method to remove Cr(VI) from contaminated water is important. Current methods for removal include reduction, ion exchange and absorption. Of these, absorption is popular because it is simple and effective.

Biosorption is a type of absorption that uses a material that is not man-made, usually some kind of waste material. Yuming Huang and Bin Liu from Southwest University, Chongqing, have designed a new biosorbent using eggshells. ’As the by-product of food processing and manufacturing plants, eggshells represent a significant waste because they are traditionally useless after the production of eggs and egg derivatives,’ says Huang. ’Using this waste to produce useful biomaterial for removal of Cr(VI) from water may be a good choice and opens up a pathway to using biowaste to treat toxic metals from water.’ 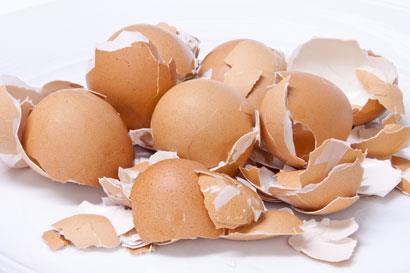 Not only did the eggshell membrane remove Cr(VI) from contaminated water, it also reduced some of it to the less toxic Cr(III)

Most biosorbents contain amine groups that remove the heavy metals through chelating cationic metal ions and/or absorbing anionic metal species. Eggshell membrane (ESM) contains many surface functional groups, including amines, amides and carboxylic groups. The team modified ESM with polyethyleneimine (PEI), which has known metal chelation properties, and they tested the resulting bioabsorbent for its ability to remove Cr(VI) from water. Huang found that not only did it remove Cr(VI) but it also reduced some of the Cr(VI) to Cr(III), suggesting that PEI-ESM can also detoxify Cr(VI).

’An increasingly diverse range of waste and natural materials have been shown to function as biosorbents for the decontamination of metal bearing waters,’ comments Stuart Gibb from the Environmental Research Institute of The University of the Highlands and Islands, Thurso, UK. Gibb says that there are some issues that need to be addressed, but he feels the work shows promise. ’The PEI functionalisation of waste eggshell membrane produces a modified biosorbent of significant novelty and interest,’ he adds.

Polyethyleneimine modified eggshell membrane as a novel biosorbent for adsorption and detoxification of Cr(VI) from waterBin Liu and Yuming Huang,?J. Mater. Chem., 2011, 21, 17413DOI:10.1039/c1jm12329g