vCJD filter for blood could be in use 'by summer'

A filter which cleans blood of the proteins responsible for variant Creutzfeldt-Jakob disease (vCJD) could be rolled out to blood banks later this year, its developer says. The device has already been approved for sale in Europe, and is currently being evaluated by the health services of UK and Ireland. 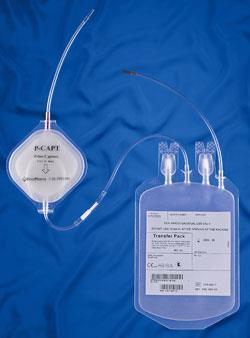 vCJD is an ultimately fatal degenerative brain disorder caused by prions - misfolded proteins - that aggregate in brain tissue. Many of the two hundred or so recorded cases of vCJD were caused by eating beef from cattle with BSE (bovine spongiform encephalopathy), but the prion can also be transmitted by transfusions of infected blood. There is no test to determine whether a person carries vCJD proteins, which has led to significant restrictions on who is able to donate blood.

Patrick Gurgel, a researcher at ProMetic Life Sciences in Mont-Royal, Quebec, Canada, says the new filter could change that, potentially putting millions of donors back on blood banks’ books and ensuring the safety of those needing transfusions. Gurgel discussed the technology at the American Chemical Society meeting in ;New Orleans, US, on 8 April. ’This is the first device that is on the market [for prion filtration],’ he told Chemistry World.

The team took five years to create the hand-sized filter, screening millions of small peptides to find one that had the strongest affinity for the prions found in contaminated blood. They stuck the best peptide onto commercial polymethacrylate resins, and then sandwiched these in alternating layers with a membrane

In tests, the disposable filter can clean the prions out of a single pack of contaminated blood in less than an hour. No prions remain in the cleaned blood, which is otherwise unchanged by the process. Tests with prion-infected hamsters showed that their filtered blood could be injected into disease-free hamsters with no ill effects.

The team hope that the UK’s National Blood Service could be using the device by the end of this year. Peter Edwardson, ProMetic’s vice-president of medical technologies, says that Ireland’s clinical trial, aiming to confirm that the filtered red blood cells are just as effective as untreated blood when transfused into humans, should be complete in a few months. If the larger UK trial, involving a few hundred patients, satisfies the government’s Department of Health, it would cost of the order of ?100 million to implement the system nationwide, says Edwardson. ’It’s never a done deal,’ he told Chemistry World. ’But we’re very hopeful.’