Richard Feynman, one of the 20th century’s greatest physicists, once said the double-slit experiment went to ’the heart of quantum mechanics’. Now, an international team of scientists has refined the famous experiment, allowing the untrained observer to watch it unfold in real time.

To understand the basics of the double-slit experiment, imagine firing solid particles at a wall containing two narrow gaps: at some distance on the other side, the particles amass in two piles. Now imagine sending water waves at the wall. Instead of two ’piles’ of water forming, the waves interfere with each other, producing a complex array of peaks and troughs. It is this difference in pattern - a complex array of peaks and troughs compared with just two peaks - that classically distinguishes waves from particles. 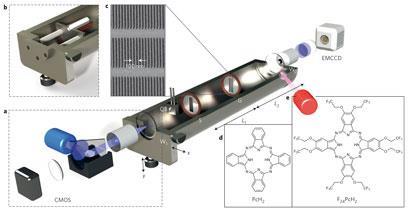 However, when things start to get small, quantum mechanics muddies the picture. Send electrons at a wall with two slits, and on the other side they amass in an array of peaks and troughs, as though they are interfering with one another. This might suggest electrons behave collectively as waves. However, even if the electrons are fired one at a time, the interference pattern builds up, almost as though each electron is interfering with itself.

In recent years, the double-slit experiment has been performed with large molecules, and even with ’weak measurement’ techniques that map the trajectory of the particles. But there has never been a demonstration to follow the arrival of molecules in two dimensions, in real time. ’I think the present experiment is as close to a textbook experiment as it can get,’ says Markus Arndt of the University of Vienna in Austria, a member of the international group.

The molecules in the latest demonstration were phthalocyanine and its derivatives, which have masses about one hundred times that of a carbon-12 atom. These molecules were launched by laser evaporation and travelled towards a silicon-nitride grating, which had slits cut into it at 100nm intervals. The molecules were then detected one-by-one by fluorescence microscopy, a process that could be viewed in real time on a computer. The researchers found that, as expected, an interference pattern built up, even though the molecules were arriving one at a time - the classic wave-particle duality of quantum mechanics.

’To me this is the most beautiful demonstration [of the experiment],’ says Reinhard D?rner, a quantum physicist at Goethe University Frankfurt in Germany, who was not involved in the research. ’This is the example I will use in my future lectures to teach students quantum mechanics.’

Arndt thinks the technique opens up the possibility for quantum-interference experiments with bigger objects, such as large proteins and viruses. ’The detector used in our present study is already perfectly adapted,’ he says.