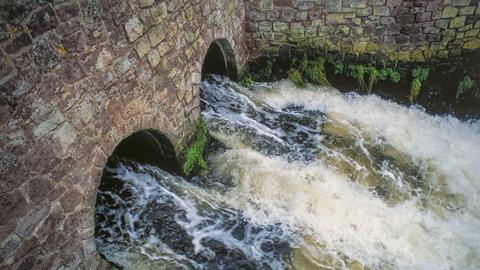 The environmental performance of England’s water companies is so poor that the Environment Agency (EA) has called for prison sentences for chief executives and board members whose firms are responsible for the worst pollution. It also wants courts to impose much higher fines for serious and deliberate pollution incidents.

The EA’s annual report on England’s nine water companies focuses on treatment of domestic wastewater and sewage. It says the industry has not reduced the number of pollution incidents or increased compliance with conditions for discharging treated wastewater. In total, there were 62 serious incidents in 2021 – the highest since 2013. The worst performers were Southern Water and South West Water.

‘It’s appalling that water companies’ performance on pollution has hit a new low,’ said Emma Howard Boyd, chair of the EA. ‘Water quality won’t improve until companies get a grip on their operational performance. For years people have seen executives and investors handsomely rewarded while the environment pays the price.’

It appears that current fines are not a deterrent. ‘The amount a company can be fined for environmental crimes is unlimited, but fines currently handed down by the courts often amount to less than a chief executive’s salary,’ says Boyd. ‘We need courts to impose much higher fines.’ Since 2015, companies have been fined over £138 million.

Water companies are ignoring their legal responsibilities, agrees a spokesperson for the Department for Environment, Food and Rural Affairs (Defra), which manages the EA. ‘Water company chiefs cannot continue to make huge profits whilst polluting our waters. We will not tolerate this behaviour and we will take robust action if we don’t see urgent improvements.’

Defra and the EA are undertaking ‘the country’s largest ever investigation’ into environmental crime to see if water companies ‘have knowingly and deliberately’ broken the law relating to the treatment and discharge of sewage. They say they’re also increasing inspections of sewage treatment works and applying new requirements for companies to monitor their storm overflows.

‘This year’s results show that, overall, industry must do better,’ said Christine McGourty, chief executive of Water UK, which represents the industry. ‘Although there were companies that demonstrated excellent performance, the total number of serious pollution incidents was too high, bucking the recent trend of year-on-year improvements. Tackling this is our single biggest priority and every company has a comprehensive plan in place to make that happen.’

When untreated sewage or wastewater enters rivers and seas, it can have severe consequences for wildlife, explains Mark Fitzsimons, professor of environmental chemistry at the University of Plymouth. ‘Untreated effluent is organic-rich and this organic matter is quickly broken down by bacteria, leaving water systems oxygen-depleted and making it hard for fish, for example, to survive. Higher levels of nutrients, such as nitrogen and phosphorus, can also lead to algal blooms which, when they decay, also use up oxygen.’

Wastewater treatment plants must meet thresholds for certain substances and should self-report when they fail to do so. They are allowed, under certain circumstances, such as weather-related power failures, to release untreated sewage to prevent the plant from being overwhelmed. ‘At present, it seems like companies are willing to take the risk, pay the fine if they are caught and still be able to make a profit. The problem is the EA needs the resources to monitor compliance and police laws adequately.’

Veronica Edmonds-Brown, senior lecturer in aquatic ecology at the University of Hertfordshire, blames years of budget cuts at the EA. ‘There have been reports that cuts have meant the EA has restricted the number of prosecutions it brings with over 93% of serious pollution incidents being downgraded. What’s more, apart from the record £90 million fine to Southern Water for discharging raw sewage into the sea, most fines are less than £2000 with the occasional £100–500k fine – usually pumping station failures.’

Edmonds-Brown is concerned about many aspects of wastewater treatment. ‘We are using Victorian piping networks for both sewage and surface water and there are many combined sewer overflows (CSO) [when combined sewer systems become overwhelmed by excess stormwater and overflow into rivers] which are not regulated. In addition, with population growth, especially in the south-east, both systems are over-capacitated. And with EA staffing issues, spot checks for licence compliance are not always carried out regularly (especially smaller companies), so we often rely on public reporting.’

The Rivers Trust, a conservation charity, says all this has lasting, grave implications for the health of rivers. ‘You have to wonder if [companies’] lower ratings actually reflect a recent increase in scrutiny after years of regulators turning a blind eye,’ says Mark Lloyd, chief executive of The Rivers Trust. ‘I raised concerns when operator self-monitoring – allowing water companies to mark their own homework – was introduced 15 years ago, and those concerns were clearly justified. Clearly, the current regulatory system is not working properly, and something has to change.’ The threat of criminal prosecution of chief executives and board members is a potential game-changer, and he hopes government will finally respond with tougher regulation. But he points out that, while the EA investigates non-compliance by water companies including at over 2000 sewage works, the EA, water company regulator Ofwat and Defra are themselves being investigated by the new Office for Environmental Protection for potentially failing to regulate sewage releases from CSOs.