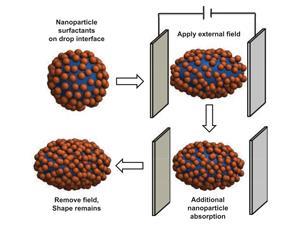 US scientists have discovered that self-assembling nanoparticles can lock water droplets into different shapes, including ellipses and tubes. The team suggests the work could be useful for several applications including microfluidic devices, sensors and drug delivery.

Water droplets are naturally spherical and after being deformed by an external force, such as gravity or an electric field, they will naturally return to a sphere. Thomas Russell’s group at the University of Massachusetts Amherst have found that when a water droplet containing carboxylated polystyrene nanoparticles is suspended in silicone oil, the nanoparticles in the droplet self-assemble to form a monolayer at the water–oil interface. When subjected to an electric field or stirring, the drop deforms and remains locked in shape once the external force is removed.

‘The discovery was truly serendipitous,’ says Russell. ‘We have been trying to understand the dynamics of nanoparticles at fluid–fluid interfaces and have been plagued with having the nanoparticles remain stable at the interface without desorbing.’ The discovery occurred when Russell’s graduate student Mengmeng Cui chanced upon a way to stabilise deformed liquid drops.

The team showed that droplets can undergo multiple consecutive deformation and jamming events and that deformed droplets remained stable even after a month. The ability to generate and stabilise liquids with a prescribed shape could have some useful applications. ‘In the case of stirring, we can make tubes of a water phase that are stable in the oil. So, we could flow something from point A to point B in the aqueous phase, like a microfluidic device,’ suggests Russell.

‘While this isn’t the first time non-spherical droplets have been made, what is exciting is the ability to tailor the shape of the droplet, which potentially opens a route to the creation of quite complex structures,’ comments David Cheung, who investigates interfaces of liquids and nanoparticles at the University of Strathclyde, UK. ‘The fact that this was only observed when both nanoparticles and surfactants were used highlights the importance of understanding how different components interact as the complexity of chemical systems increases,’ he adds.