Ignorance about the water demands of power and fuel generation is seriously undermining the prospects for alternatives to fossil fuels including biofuels and hydrogen. That’s the message from leading environmental scientists who gathered at a special session on water and energy at the American Chemical Society meeting in New Orleans on 9 April. 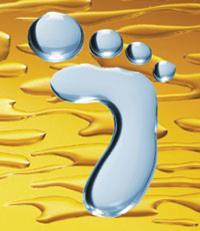 The problem has been given additional urgency since President Bush, in his 2007 State of the Union address, called for 35 billion gallons of alternative fuels - largely biofuels - to be produced annually by 2017, replacing 15 per cent of current gasoline consumption. That would triple America’s ethanol capacity, which currently comes almost entirely from fermenting corn (maize).

’The water demand when you’re irrigating corn is phenomenal,’ says Jerald Schnoor, an environmental scientist from the University of Iowa in Iowa City. ’That means it’s not sustainable - you’re pumping down already-depleted aquifers.’

Water shortages are already halting construction of new power plants, whether conventional power or alternative fuels, adds Richard White, a systems scientist based at Lawrence Livermore National Laboratory (LLNL) in California. One of the key problems is that freshwater is used for most energy-generating processes, including cooling, which means it competes directly with irrigation and drinking water needs.

In October 2007, Schnoor chaired an expert panel on the issue for the US National Academies’ National Research Council (NRC), releasing a milestone report on the issue: Water Implications of Biofuels Production in the United States.

The report predicted that a serious hike in corn ethanol capacity could trigger local water shortages, along with soil erosion and worrying rises in fertiliser run-off. For example, Schnoor says that a typical facility producing 10 million gallons of corn ethanol per year consumes as much water as a town of 5000 people. There are currently at least 153 ethanol plants active in the US, using about 8.7 billion gallons of water per year - that’s about 4 gallons of water for every gallon of ethanol, or roughly twice the water demand of gasoline production.

In theory, 21 million gallons of the president’s 2017 ethanol target should be cellulosic ethanol. But there are no commercial-scale cellulosic ethanol plants yet in operation and shifting to these second-generation biofuels, made from waste plant matter, may not significantly reduce water load if irrigation is still required. ’You need rain-fed agriculture,’ says Schnoor, suggesting that prairie grasses would be a more promising cellulose source than food crop stalks.

Much of the fertiliser used to grow corn for ethanol drains into the Mississippi River, and ultimately ends up in the Gulf of Mexico, exacerbating a growing anoxic ’dead zone’ there. Around eight grams of nitrogen - ’about a handful of fertiliser,’ says Schnoor - ends up in the Gulf for every gallon of corn ethanol produced.

However, there are relatively simple ways to make the industry much more sustainable, says Tim Lindsey of the University of Illinois at Urbana-Champaign.

One crucial step would be to turn ethanol facilities into true biorefineries. Ethanol is just one of many compounds produced in the plants, yet most are thrown away as waste. Recovering these valuable chemicals - including proteins, vitamins and minerals - as chemical feedstocks or animal feed could boost profits and efficiency.

And since much of the water needed to make power or fuel is used for cooling, diverting ’reclaimed water’ from municipal water plants instead might be one way to reduce freshwater demand.

Corn ethanol is far from alone in its water demands. Carbon capture and storage (CCS) could make fossil fuels a more sustainable energy source. But Andrea McNemar of the US Department of Energy’s National Energy Technology Laboratory in Pittsburgh, has estimated that rolling out CCS across all thermoelectric power stations - including coal, gas and nuclear - will add 4-6 billion gallons of water a day to the 150 billion gallons the stations are expected to consume daily by 2030.

And LLNL’s Richard White says that moving towards the ’hydrogen economy’ also places additional stress on water resources. He and his colleagues have started an initial life-cycle analysis on the water demands of possible large-scale hydrogen plants, which will most likely generate the gas from steam-methane reforming.

Although there are many uncertainties, it’s clear that if the reforming process is powered by conventional grid electricity, the amount of water needed to create a kilogram of hydrogen (containing roughly the same energy as a gallon of gasoline) is currently more than an order of magnitude greater than the equivalent amount of corn ethanol.

Ultimately, the greatest problem may be in getting all this information to the decision-makers who need to hear it. ’The sheer complexity of the situation almost never makes it to the politicians,’ session organiser Richard Sustich of the University of Illinois told Chemistry World.