Light-driven water splitting reactions have been carried out in near-zero gravity by researchers investigating potential new ways to generate oxygen and fuel during long-range space missions. Their work suggests that careful catalyst design could offer possible solutions to the problems faced by the reaction in very low gravity. 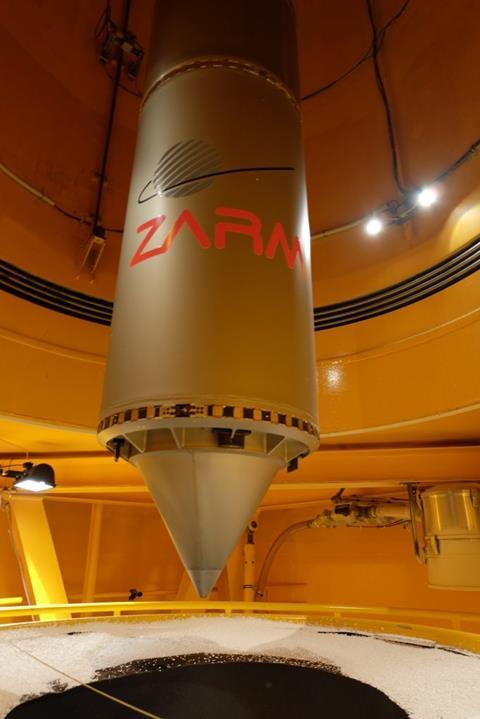 A two-stage process generates oxygen on the International Space Station: solar cells generate an electric current, which then electrolyses water. The process can be simplified using a single photoelectrochemical surface that absorbs light and develops a potential difference that allows it to oxidise water on one surface and reduce hydrogen on the other. Katharina Brinkert of the California Institute of Technology says that the volume and weight advantages of carrying only one device into space are undeniable, but such integrated devices had never been tested in very low gravity conditions.

Brinkert and colleagues remedied this by incorporating photoelectrochemical half cells for the reduction of H+ ions to hydrogen gas, together with light sources and all necessary analytical devices, into 1.34m capsules. They conducted the experiments in the 9.3s it took the capsules to fall freely down the 120m Bremen Drop Tower at the Center of Applied Space Technology and Microgravity in Germany, comparing their results with those in Earth’s gravitational field.

The researchers first studied catalysts in which the rhodium catalyst was simply electrodeposited onto indium phosphate, forming an unstructured thin film. These worked well in Earth’s gravity, but their effectiveness dropped drastically in free-fall as hydrogen bubbles, which floated off the electrode in normal conditions, stayed on the surface in a froth layer in near-zero gravity, blocking the electrode. Nanostructured electrodes, however, maintained their effectiveness and showed more than three times the current density of the unstructured electrodes because bubbles were less likely to stick to the structured surface.

The researchers are now working towards a full electrochemical cell in low gravity. ‘So far, we only work in a half cell,’ explains Brinkert. ‘The next big step is the oxygen evolution reaction, and then to combine the two reactions into a full device.’

Edman Tsang of the University of Oxford, UK, describes the work as ‘promising’ but says the researchers’ current figures appear to fall some way short of the best-in-class results for such systems. Cao-Thang Dinh of the University of Toronto in Canada says nanostructuring electrochemical surfaces to prevent bubble formation has been done before. However, he explains: ‘In microgravity…there’s not really any work on direct photoelectrodes. These researchers are the first to do this kind of reaction and demonstrate these problems. Their ideas for solving them aren’t really new, but they may lead to further ideas for improving efficiency of integrated systems in microgravity.’