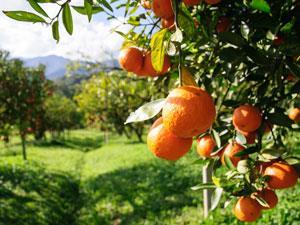 Scientists have measured the exchange of hundreds of volatile organic compounds (VOCs) in the air above an orange grove in California and the ecosystem below. The finding could have implications for climate and air pollution models that only include a small number of these compounds.

The majority of VOCs originate from human activity and the biosphere. They play a crucial role in ozone production and secondary organic aerosol (SOA) formation, which influence human health, regional air quality and the global climate. It has been known for over 10 years that the atmosphere contains thousands of different organic compounds, but technological limitations meant that previous studies have focused only on a few major species, such as methanol, isoprene and terpenes.

Now, Rupert Holzinger at Utrecht University in the Netherlands and colleagues at the University of California, Berkeley, US, have developed a mass spectrometry technique to measure the exchange of VOCs above an orange orchard.

'When we started the data analysis of the full mass scans I was excited because I expected that we would discover a couple of new compounds that had not been reported before,' says Holzinger. 'But I was really stunned when we realised that there were actually hundreds of species that exchanged with the ecosystem.'

The team installed gas inlets and a sonic anemometer on the top of a mast above the canopy of the orange grove to collect VOCs and wind data. The wind data told them whether air was rising or descending which could then be correlated to VOC concentrations, thus revealing if a compound was being emitted to the atmosphere or deposited in the ecosystem.

'Never before has it been possible to measure accurately the flux – both emission and deposition – of so many different compounds simultaneously, nor at such low flux values,' says Susan Owen, who investigates VOC emissions at the Centre for Ecology and Hydrology, UK. 'These data offer a vast choice of volatile organic species for modellers who are trying to close the chemistry gaps in predictive simulations of air quality.'

Understanding the emission and deposition of so many compounds could reveal the key chemical mechanisms in the interaction between air pollution and biogenic emissions. These mechanisms are important balances and controls in the climate system and their understanding will eventually result in  improved models. 'Many of the detected species may be highly reactive with ozone and contribute to chemical ozone loss, which potentially meliorates ozone pollution. On the other hand, the products of such reactions may be unhealthy and easily condense on aerosols. As part of aerosols they can be inhaled and aggravate aerosol related health issues,' says Holzinger.

However, Holzinger also acknowledges that the present work has limitations. 'The current study was performed above an orange orchard, which is a nice model ecosystem, but is of limited global relevance,' he says. 'The most important challenge is to repeat these measurements in a suite of different and globally relevant ecosystems.'