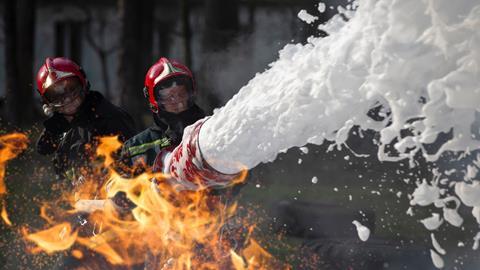 What to do with vast stockpiles of PFAS-laden firefighting foam?

Millions of litres of firefighting foam that contain high levels of per- and polyfluoroalkyl substances (PFAS) are sitting in stockpiles. Much of this leftover material has been there for decades, held in storage at fire stations, airports, oil facilities and chemical manufacturing plants across the US. Until now, there hasn’t been an acceptable method to rid the world of these stashes of aqueous film-forming foams (AFFF), but the US-based R&D organisation Battelle is set to tackle this.

The non-profit has proven that its new technology based on supercritical water oxidation chemistry (SWOC) – affectionately dubbed the PFAS Annihilator – completely destroyed stores of PFAS-laden AFFF in a recent deployment that was funded by Greenfire, a US firefighting products company.

Firefighting foams have been used for decades and are remarkably good at suppressing diesel, propane, petrol and jet fuel fires. They work by forming a thin film that coats the fuel and starves the fire of oxygen. In the past, runoff from AFFF was not contained during firefighting training sessions or when extinguishing fires, allowing the PFAS chemicals in to the environment to leach into soil and groundwater. Now, recent government regulations involving PFAS mean that many of the military sites, fire training centres and airports that have relied on AFFF for more than 50 years have been directed to stop using these products, and stockpiles have built up.

Nicknamed ‘forever chemicals’, PFAS are associated with health problems like immune system dysfunction, low birth weight, high cholesterol, thyroid disease and certain cancers. The stability of the C–F bond means that these compounds are also highly persistent in the environment. Complicating matters is the fact that these substances bioaccumulate and biomagnify up the food chain, increasing significantly in the blood and organs of those animals at the top. PFAS chemicals have been found in human blood, urine and breast milk.

‘AFFF was always the benchmark – it works great to suppress fire, but [the PFAS within] builds up in the environment, causes cancer and is in basically everyone’s bloodstream,’ states GreenFire’s chief executive Brandon Miller.

Military bases, airports and fire departments must have AFFF on hand to be able to use it in the case of a severe fire, explains Will Dichtel, an organic chemist who studies PFAS at Northwestern University in Illinois. ‘The good news is that they are not dumping it down the drain, but we are kind of in a limbo where all of this stuff is out there in the world and we have increased recognition that we shouldn’t use it anymore.’

The problem is that burning these chemicals does not completely destroy them and may actually create dangerous transformation products that are then released and further spread throughout the environment. Such concerns led the US Department of Defense to put a moratorium on incinerating PFAS waste materials, including AFFF, earlier this year.

‘With incineration, there could be products of incomplete destruction,’ explains Amy Dindal, who heads Battelle’s PFAS programme. Despite the very high temperatures involved, it remains unclear whether PFAS are destroyed, she says.

At the same time, landfilling these leftover stores of AFFF is not a solution because the PFAS chemicals can eventually seep out into groundwater and make their way into waterways and wetlands.

Typical fire stations store AFFF onsite and the amount of this foam stockpiled varies depending on the location. On average there are tens of thousands of litres at a particular collection point, according to Dindal.

Battelle’s PFAS Annihilator technology offers a potential solution. It is based on supercritical water oxidation, which has been used since the 1980s to destroy difficult-to-treat and dangerous compounds like polychlorinated biphenyls.

In the supercritical state, where water passes 374°C and 22.1MPa, an oxidant can be added to destroy the strong carbon–fluorine bonds. ‘When we break the C–F bond we have carbon, which is then combined with the oxygen that’s available due to the oxidation process, and you form some small amounts of CO2,’ Dindal explains.

The other end product is hydrogen fluoride (HF), a caustic acid that is neutralised by adding sodium hydroxide to create an inert salt. The salts then dissolve in the PFAS-free water, so the byproduct of the whole process is just a small amount of CO2 and inert salts.

Earlier this year, Battelle used its PFAS Annihilator mobile unit in a week-long pilot demonstration at a wastewater treatment facility in western Michigan, and it broke down PFAS in 2000 litres of contaminated water per day. PFAS in landfill leachate was successfully destroyed at the site, and Battelle is now working on developing a larger unit with 10 times the capacity to be deployed in the field next year.

GreenFire struggled from its inception to get a hold of firefighting foams that met its needs. ‘We couldn’t find suitable foams or wetting agents that performed the way we liked,’ recalls Miller. ‘Many were highly corrosive, which actually damaged the equipment.’

Miller was in organic food production and farming for 25 years, and so he was used to working with natural products. ‘When we couldn’t find a viable replacement to AFFF, that made us realise there was a much bigger need in the industry for something that universally could provide this fire suppression with green technology.’

The company quickly switched into foam production, and it built up relationships with different fire houses across the country, as well as with larger oil companies. Miller quickly learned that all of them had stockpiles of AFFF but no solution to get rid of them. ‘When we found out that Battelle’s technology actually destroyed PFAS, rather than incinerating it, sending it somewhere else or burying it in the ground, GreenFire immediately wanted to get involved,’ he says.

Recently, Battelle used its PFAS Annihilator technology at GreenFire’s collection site in Charlotte, North Carolina to destroy AFFF stockpiled by several local fire stations. Nearby Waxhaw Fire Department had approximately 760 litres of AFFF foam that had been there for over 40 years, and its chief Gregory Sharpe jumped at the chance to see if Battelle’s technology could safely get rid of his department’s stockpiled AFFF.

Greenfire also replaced those AFFF stores with a new, greener foam that it has developed. While the ingredients and composition of the company’s GreenFire Firefighting Foam (GFFF) are proprietary, it has been independently certified as fluorine-free under Clean Production Action’s GreenScreen programme, and as safe to use in food preparation areas by NSF.

From its original base, the company says it was able to engineer a robust foam with the same fire suppression capabilities as AFFF. After examining the commercially available firefighting foams to determine which was the safest in terms of aquatic, mammalian and environmental toxicity, GreenFire purposely incorporated those into their foams, along with some other proprietary minerals, foam structure and binding agents.

‘I think it is great that Battelle is “battle-testing” their supercritical water oxidation chemistry at the technology-deployable transportable-unit level,’ says Michael Wong, chair of the department of chemical and biomolecular engineering at Rice University. ‘Published literature shows that SWOC chemistry works on breaking down PFAS, so this chemistry is not new. I am curious to know the energy cost to pressurise the water (to above 200atm, or 3200psi) and to heat the water (to above 370°C/700°F). I imagine the PFAS Annihilator unit to be expensive, and needs a bit of expert handling.’

Although this specific project was a month-long initiative, Greenfire is working on developing a long-term relationship with Battelle to continue destroying and replacing the AFFF stockpiles that it is receiving from various locations around the country.

Battelle is also in conversation with various state agencies across the US that are considering AFFF takeback programmes to collect this stored material and safely dispose of it. ‘Destruction with a technology like the PFAS Annihilator is an ideal solution for that,’ Dindal states.

This is not just a US problem. ‘All of those industries that are in the US – fire stations, airports, petroleum facilities and chemical manufacturing plants – are all going to be the same across the globe in terms of having stockpiled AFFF,’ she says.

Miller agrees, noting that GreenFire has attracted a lot of interest internationally – especially from fire departments and civil defence organisations in Europe, as well as large petroleum conglomerates in the Middle East.

‘A lot of the oil-producing countries are … dumping hundreds of gallons of [PFAS-conatining] AFFF into the oceans right now and are looking for something else to replace that,’ he says. ‘It’s a worldwide problem, and the first solutions to address it are starting here in the US, but this is something that the whole world needs.’

Dichtel is impressed by Battelle’s work. He calls it ‘interesting and promising,’ and says it makes sense to use this PFAS Annihilator technology on AFFF. ‘Battelle is offering a one-time operation where this material is degraded and that solves a problem for the community.’

‘It generates HF that is then neutralised later,’ Dichtel explains. ‘If they are generating HF under these conditions then that has some pretty serious safety issues for handling as well.’ While these concerns are not insurmountable, ‘the more such a system is deployed and operated by non-experts to destroy AFFF there will need to be very specific maintenance and safety protocols’, he states.

‘The reactor has to be engineered carefully, and if it were to fail you are talking about potentially an explosion or leakage of water with PFAS and HF, and that could be pretty catastrophic,’ Dichtel warns.

Nevertheless, he is excited about the fact that Battelle is out there in the field destroying real deployed AFFF. ‘They are going to places where it is stockpiled, and without this pilot communities are storing it with nothing to do with this stuff,’ he continues. ‘Coupling this with a programme that replaces the AFFF with a non-fluorinated fire suppression product is also good.’

Dichtel accepts GreenFire’s assertion that GFFF doesn’t contain PFAS, but is still cautious. ‘We allow companies to be unclear about what their products are, and this is what got us into the PFAS mess to begin with,’ he tells Chemistry World. ‘GreenFire doesn’t want to give out the secret of its product, but that means we do have to take them at their word that there is nothing in that product that is toxic – I hope that they are right.’

Ed: This article was updated on 24 October 2022 to clarify Greenfire’s company history and evidence around the safety and PFAS content of its GFFF products.