Unique patterns made by drops of whiskey offer a way to identify different liquor brands – and might provide a tool for authorities investigating counterfeited products.

When mechanical engineer Stuart Williams left Kentucky to go on sabbatical, he took with him a case of whiskey that he’d be given by friend from the local Brown–Forman distillery. His destination was the North Carolina lab of colloid scientist Orlin Velev, and when Williams met his new colleagues, the whiskey proved to be more than just a delicious icebreaker.

‘Dr Velev just asked a question: “Well, you have this case of whiskey of different ages, different brands, different types. What if you just take a drop and evaporate it – can you tell the difference without tasting it?”’ recalls Williams. 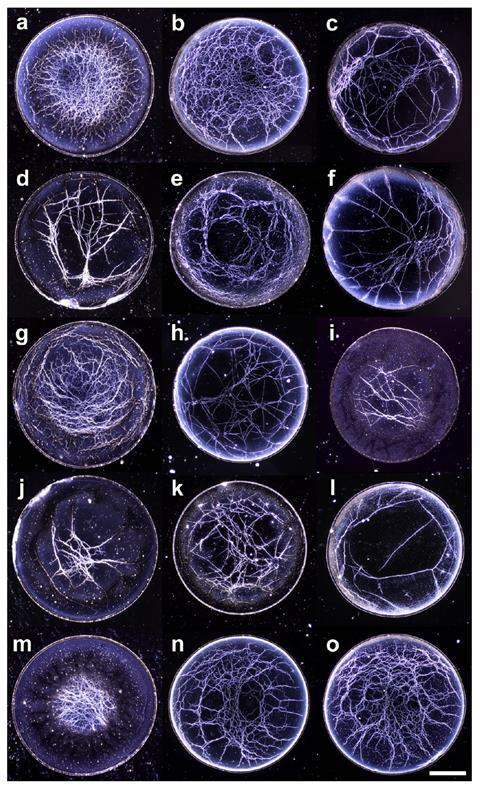 Each whiskey leaves behind a distinctive pattern when it evaporates

Williams and his co-workers evaporated microlitre droplets of whiskey on glass surfaces, and then analysed the patterns that they left behind. Drops of neat whiskey left a uniform film with no distinctive features, echoing results seen in previous studies with Scotch whisky. But when the American whiskey was diluted with water down to about 20–30% alcohol content, the droplets began to leave web-like patterns on the glass.

The patterns arise because hydrophobic compounds within the whiskey aggregate into micelles when the water is added. When the diluted whiskey droplet is placed on a glass slide, the micelles migrate to the droplet surface where they merge into a thin skin called a monolayer.

‘The droplet gets smaller as it evaporates away, and this causes wrinkles and buckles of this film – and that’s what we’re seeing,’ explains Williams. Each whiskey has its own flavour profile made of thousands of different chemicals, so the monolayers formed by different brands have different mechanical properties – each buckles differently, giving unique motifs. 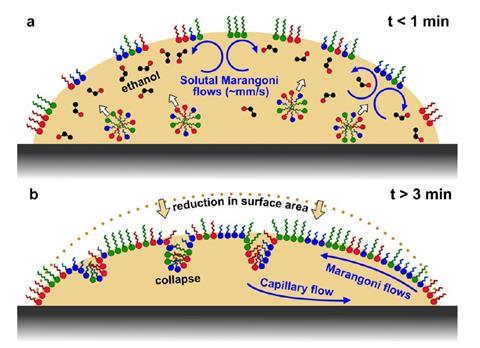 Micelles formed within the droplet migrate to the droplet surface and merge with each other, forming a monolayer (a). As the droplet evaporates and its surface shrinks, the monlayer buckles and wrinkles (b)

The team compared images of webs formed by dozens of different whiskeys, and could correctly identify the brand 90% of the time. They believe that the technique could be used by manufacturers during sample analysis and perhaps even applied in anti-counterfeiting.

Burak Eral, who investigates hydrodynamics and soft materials at Delft University of Technology, Netherlands, describes the whiskey webs as ‘an intruiging phenomenon’.

‘This study brings a scientific flavour to a popular drink,’ says Eral, who believes that similar phenomena may be discovered with other beverages. ‘Complete physical understanding of film and crack formation processes in the presence of different congeners may open extension of the finding beyond American whiskey,’ he says.

Williams says that his team is keen to spin its web research further, and to carry out an in-depth statistical study to better understand the relationship between flavour chemicals and the patterns they produce. He also hopes that the whiskey webs might help to engage the general public with science, and has set up a website where people can learn more about the project.

‘This is a nice blend between science and art, and the bonus is that there’s whiskey involved – so it definitely captures attention,’ says Williams. ‘If someone can walk away and say, “Hey, I now know what a colloid is” or “I now know what a monolayer is”, then that’s great.’