The battle between Republicans and the White House Office of Science and Technology Policy (OSTP) has culminated in the office having its budget cut by over 30 per cent. This came about as a result of anger on the part of lawmakers, especially Representative Frank Wolf - a Virginia Republican who chairs the subcommittee which funds the OSTP and other science agencies - over the OSTP’s collaboration with China.

Congress passed a funding measure on the 17 November for several science agencies, including the OSTP - which is responsible for advising the Obama administration on the effects of science and technology (S&T) on domestic and international affairs, and for leading interagency efforts to develop and implement sound S&T policies. As a result the office’s funding was cut by more than $2 million (?1.3 million) to $4.5 million. Obama signed the measure into law on 18 November.

The report accompanying the bill linked the cut to a prohibition against OSTP partnerships with China that was included in last year’s funding round. However, the new language was softened slightly to restrict any OSTP partnerships that would carry the risk of technology transfers to China while allowing room for other activities to proceed in areas such as public health planning or disaster response, provided congress is notified and gives approval. 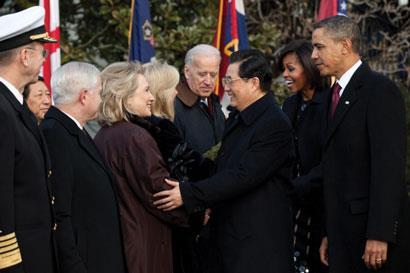 Republicans involved in clipping the OSTP’s budget are unapologetic, insisting that the office violated the law by engaging with China despite the ban. They cite a congressional Government Accountability Office (GAO) report’s conclusion last month that the OSTP broke the law by participating in such partnerships. ’This is to send a message - you shouldn’t be dealing with China,’ states Dan Scalding, spokesperson for Wolf, who originally inserted the anti-China language into last year’s bill. ’They have said they are going to continue to do business with China,’ Scalding adds.

Holdren also cited a formal opinion issued by the Justice Department in September, which concluded that the OSTP’s collaboration with China falls under the president’s exclusive constitutional authority to conduct foreign diplomacy and are therefore exempt from the ban in question.

However, Wolf and Rohrabacher emphasised China’s dismal human rights record and said that the country is directly competing with the US and is intent on stealing information on sensitive American technologies.

Scandling says the OSTP cut pales in comparison with increases that Wolf and other Republicans helped to obtain for science agencies like the National Science Foundation (NSF). In fact, NSF’s budget jumped by roughly 2.5 per cent, or $173 million, in the latest funding round, to top $7 billion.

Despite those increases, OSTP spokesman Rick Weiss is concerned about the impact of OSTP’s cut. He says the office’s new $4.5 million budget - though considerably higher than the $3 million that some Republicans in congress had sought to impose on the office - represents a significant decrease and will have ’real consequences’.

’In light of these reductions, the OSTP will prioritise existing activities in the areas where it has statutory and executive responsibilities for coordinating federal research programmes and developing policies, including STEM education, advanced manufacturing, sustainable energy, innovation and entrepreneurship, open government, scientific integrity and national security,’ Weiss says.

Many observers agree that the OSTP’s loss must be seen against the backdrop of science doing fairly well in funding terms, despite the bleak economy. Nevertheless, they say the bite out of the OSTP will probably mean that fewer reports will be issued by the advisory bodies that it controls and funds - like the National Science and Technology Council and the President’s Council of Advisors on Science and Technology.

Among those disappointed by the OSTP cut is the Association of American Universities (AAU). ’We hope that the White House will figure out how to cope with this reduction without damaging the OSTP’s ability to coordinate science policy across government,’ the group’s spokesperson, Barry Toiv, tells Chemistry World.

Earlier this month, the American Association for the Advancement of Science’s chief executive, Alan Leshner, wrote to senior House and Senate members warning that any significant hit to the OSTP will ’dramatically inhibit’ the ability of the federal government to coordinate, prioritise and manage the federal research and development enterprise. He said a large reduction in the OSTP’s budget would also ’seriously limit’ the nation’s ability to take appropriate account of S&T considerations in policy formulation. More recently, the heads of AAU and the Council of Governmental Relations - an association of US research universities and affiliated medical centres -expressed similar concerns in a 14 November letter to congressional appropriators.