Wonder material not so wonderful

Graphene - a sheet of graphite just one atom thick - is often claimed to be a wonder material, thanks to its superlative mechanical, thermal and electrical properties. But now a group of UK chemists is claiming that, in an electrochemical setting, graphene is not such a wonder material after all. Contrary to the widely held view, the chemists think graphene electrodes are mostly ineffective at transferring electrons, implying that graphene is a poor choice for sensing applications.

Craig Banks and others at Manchester Metropolitan University came to the conclusion after having performed electrochemical experiments with various electrodes. Some of these electrodes were coated in a single graphene layer, some were coated in a graphene multi-layer, and some were left uncovered. Carefully measuring the current passing through the electrodes while changing the applied voltage, Banks’s group discovered that electron transfer in graphene occurs mostly around its edges and at any defects. ’Given its geometric size, this means that it is largely unreactive,’ says Banks. 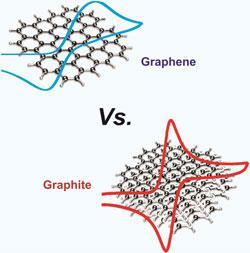 Chemists think that graphene electrodes are mostly ineffective at transferring electrons, implying that graphene is a poor choice for sensing applications

The chemists believe that graphene researchers generally modify electrodes in one of two ways: coating them with a single layer of graphene, which tends to block electron transfer, and coating them with a graphene multi-layer, which sometimes improves electron transfer. However, multi-layered graphene is more akin to graphite, say Banks’s group, and has more edges to supply electrons. What’s more, different underlying electrodes can have different responses to graphene coating. ’Researchers in the field need to be more informed and consider that the electrode they are modifying is critical as well as the coverage of graphene,’ says Banks.

Alexander Balandin, a materials scientist specialising in graphene at the University of California at Riverside, US, thinks the results are important, and agrees that graphene coatings should be compared with graphite coatings in future electrochemical experiments. ’At the same time, I would not jump too quickly to the conclusions and rule out graphene as the electrode material completely,’ he says. ’It is known that depending on the graphene quality, exact number of the atomic planes, environment and functionalisation of its surface, graphene’s properties can vary a lot.’

In fact, for many applications graphene may still be a wonder material. The results of Banks’s group do not necessarily affect graphene’s potential uses as a transparent conductor for touch screens or as a heat sink, for example. And Banks points out that slow electron transfer in electrochemistry is sometimes an advantage. ’Graphene [still] has huge potential in energy storage and generation applications,’ he says.