Long touted for their promise in gas storage, catalysis, drug delivery and sensing applications, metal organic frameworks (MOFs) have finally delivered and made the transition from the lab to their first commercial product – a technology that prolongs the life of fruit and vegetables in storage.

‘We see this as being the advent of the MOF generation with the vast potential of these amazing materials finally being realised,’ says Paschal McCloskey, Chief Executive of MOF Technologies in Belfast, UK, the company behind the technology. 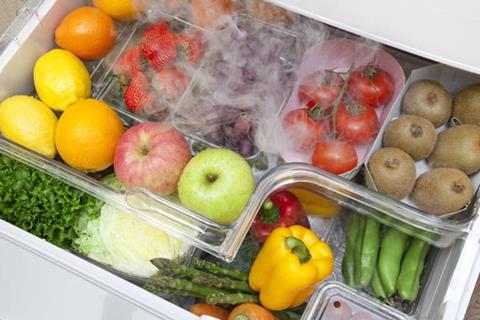 In 2014, MOF Technologies teamed up with Decco Worldwide Post-Harvest Holdings to find the right MOF for Decco’s next-generation packaging called TruPick, which prevents fruits and vegetables ripening in storage. Currently over 40% of fruit is lost from the time of harvest to the time it gets to the consumer.

TruPick works by releasing 1-methylcyclepropene (1-MCP), a synthetic plant growth regulator that slows down ripening. It was thought that a MOF would be ideal for the storage and release of 1-MCP because of their porous structures. However, MOFs are usually produced in organic solvents, which poses food safety concerns. To overcome this, MOF Technologies developed a cost-effective and solvent-free mechano-chemical process for scalable MOF production.

The team screened several potential MOF candidates, whittling them down to one which was taken through to product development. The precise details of the MOF remain undisclosed for commercial reasons but McCloskey explains the product takes the form of sachets containing a water-soluble gel. When placed inside a small gas generator located inside a sealed storage environment, the sachets immediately release 1-MCP into the air. This binds to the receptors on the surface of the fruit which delays ripening and spoilage by inhibiting the production of ethylene, which is naturally released to promote ripening. ‘You actually only need a very small amount of gas, a few grams, to treat each storage unit,’ says McCloskey.

‘It’s great to see the promising technology of metal organic frameworks finding commercial application,’ comments Matthew Hill, a MOF researcher at CSIRO, Australia’s national science agency, and CTO of spin-out company MOFWorx. ‘Many people have been worried about the long approval process for the use of MOFs in food applications, but MOF Technologies and their partners have shown that this can be done, providing many opportunities for the future.’

TruPick has already gained approval from US and Turkish regulatory authorities with registrations now pending in all the other main fruit-growing regions. However, a similar product already exists. SmartFresh, developed by AgroFresh in 2004, releases 1-MCP from a sugar-based powder formulation dissolved in tap water. This currently holds the monopoly of the market, which is worth up to $250 million (£193 million) each year.

‘TruPick is as effective as the current product, allowing for efficient storage and distribution of these fruits for up to 6 months,’ says McCloskey. ‘We believe it will take a sizeable chunk of this market in the next three to five years given the very strong customer relationship and extended market reach of Decco.’