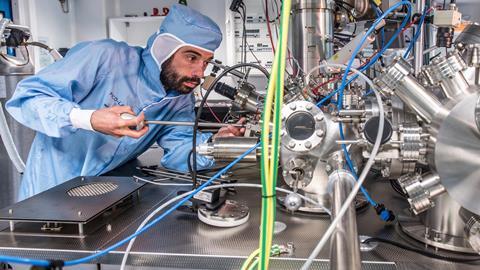 World’s first nanocar race a success for science and engagement

Six teams from around the world took part in the first ever Nanocar Race last weekend in Toulouse in France. They competed for almost 36 hours on the smallest racetrack ever made, a gold plate specifically engineered for the occasion.

The cars’ ‘drivers’ received training on how to use the new four-tip scanning tunnelling microscope (STM) at the French National Center for Scientific Research’s (CNRS) institute in Toulouse, but moving single molecules is still tricky. Just placing the nanocars on the starting line took six hours. ‘The scanning probe tip can damage the molecules,’ explains James Tour, a researcher at Rice University in Texas, US and one of the leaders of the Austrian–American Nanoprix team. ‘Pilots had to rapidly manipulate the nanocars without touching them.’

The race had a clear winner in under two hours – the dipolar racer designed by Tour and Leonhard Grill, a researcher at the University of Graz, Austria. ‘We have been making nanocars for 19 years, so we could incorporate all our learnt design advantages into a single package,’ explains Tour. This experience paid off and their nanocar was so fast organisers had to put in place some handicaps. Instead of using the gold racetrack, the Nanoprix team ran on silver. ‘Silver is slower [because] it has surface adsorbates,’ Tour explains. Moreover, they started 50nm behind the other teams. Yet, they saw the chequered flag in less than 90 minutes. Grill says that they broke the record for fastest manipulation of a single molecule: ‘We believe it will not be beaten for quite some time.’ 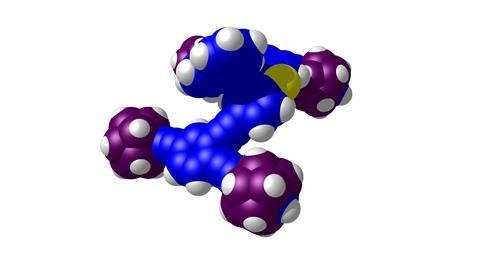 Surprised by the unexpected speed of the dipolar racer, the organisers also gave a prize for the quickest nanocar on the gold track. ‘We are proud to have obtained the gold medal on gold!’ joked members of the Swiss team, led by Rémy Pawlak, a researcher at the University of Basel, Switzerland. Gwénaël Rapenne, a researcher at the University of Toulouse and leader of the French team, says that ‘winning was not a priority’. Although their green buggy came last Rapenne and co-workers took a consolation prize for the best images of a nanocar and the elegance of their molecule.

Steve Goldup, who works on interlocked molecules and molecular machines at the University of Southampton, UK, but didn’t take part in the race, says that the dipolar racer is a ‘really nice design’. He notes that the team ’optimised it to maximise the dipole (maximises the force created by the electric field of the STM tip) and minimise the molecular weight. It will be interesting to find out – and the experiments to work this out will be interesting in themselves – if the car skids along or if the wheels roll. Either way would achieve the goal as the wheels prevent the aromatic body from sticking to the surface.’

The race did have a serious purpose, however; the four-tip STM allowed the researchers to perform some molecular manipulation feats never achieved before. ‘Although I would like to congratulate the race winners from Rice–Graz, the big winner here was STM technology: the fact that the race could be run at all shows just how far this technology has come!’ says Goldup. Rapenne explains that one such feat was that their green buggy ‘was able to climb “atomic stairs” – four successive atomic step edges – for the first time’. The Swiss team has already submitted a paper on their nano-dragster.

Christian Joachim, a researcher at the CNRS and scientific director of the Nanocar Race, expects the race to lead to a number of publications. ‘We demonstrated the resolution power of a four-tip STM, we succeeded in depositing very different molecules on the same surface and we effectively disseminated our knowledge about single-molecule microscopy to the wider public,’ Joachim says. The drivers of the nanocars were also impressed by how many people the event reached. ‘More than 100,000 people followed the race on social networks!’ exclaims Rapenne. ‘It’s very impressive.’