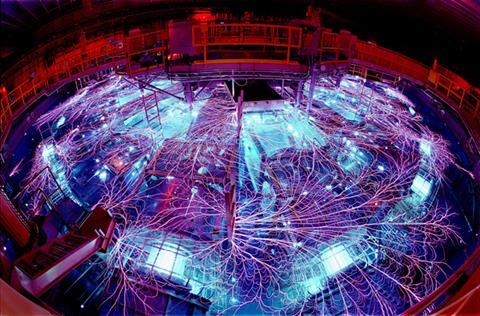 Scientists in the US and Germany have successfully transformed liquid deuterium into a metal at pressures rivalling those at the centre of our own planet. The discovery is another step along the long road to obtaining solid metallic hydrogen, a phase of matter that has eluded scientists for 80 years.

Since Eugene Wigner and Hillard Bell Huntington first theorised that pure hydrogen can become metallic at extreme pressures in 1935, scientists have been scrambling to get their hands on the ‘holy grail of high pressure physics’. By putting molecular hydrogen under enough pressure, the covalent bond holding the atoms together should weaken and allow electrons to move freely as if they were in a metallic state. Some researchers claim to have realised metallic hydrogen but many scientists remained unconvinced.

Recent efforts by a team based at the Max Planck Institute for Chemistry, Germany, using a diamond anvil cell (DAC), where a compound is compressed between two flattened diamond tips, have revealed that it is indeed possible for hydrogen-rich compounds to adopt a metallic character.

But there are limits to what a DAC can achieve according to Marcus Knudson from the Sandia National Laboratories, US, whose team carried out the new research on deuterium. ‘DAC techniques can achieve around 200GPa pressures, but hydrogen at high pressures becomes extremely reactive,’ says Knudson. He explains that this reactivity makes it nearly impossible to conduct experiments under the diamond anvil.

Knudson and his colleagues have adopted a different approach by using shockwaves to compress liquid deuterium at the Sandia Z machine, a power generator capable of producing magnetic fields with a strength of up to 20 mega gauss – six orders of magnitude larger than the Earth’s magnetic field.

The team initially condensed deuterium gas at 20K in an aluminium cryocell. Once the liquid had been produced, a pulsed current from the Z machine was passed through an electrode, which struck the front of the cyrocell to produce a pulsed shockwave.

By exploiting these shockwaves to slowly compress the liquid, the team analysed how well the deuterium reflected light as the pressure was ramped up. At low pressures the deuterium was transparent, but it suddenly began to reflect light at about 300GPa.

This abrupt change in the hydrogen isotope’s optical properties is a typical indicator of an insulator-to-metal transition, according to Knudson. He goes on to explain that such a finding will be crucial in our understanding of the evolution of planets and stars, where hydrogen metallisation can be linked to the pressure and temperature profiles of planetary cores.

But Graeme Ackland from the University of Edinburgh, UK, who was not involved in the work, believes the impact of this result will also help to ‘renew enthusiasm’ in the search for solid metallic hydrogen. ‘There are phases [out there], which you might call metallic hydrogen, but they’re different in character to this because those ones become metallic by heating it so much that the electrons boil off. Whereas here, you’re squeezing it so hard, [the electrons] get squeezed out of the bond,’ Ackland tells Chemistry World. ‘I think it’s amazing what they’ve done.’

Did you enjoy this article? Take our survey and give us your feedback: Click here to start