Zombie reaction returns from the dead

An oscillating reaction that apparently stops after 10 hours, but is then resurrected spontaneously several hours later, has been discovered by a group of chemistry students at the Mito Dai-ni senior high school in Ibaraki, Japan. 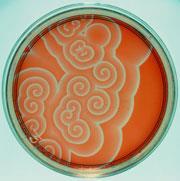 Belousov-Zhabotinsky reactions are an example of non-equilibrium thermodynamics

The well-known Belousov-Zhabotinsky reactions exist in a non-equilibrium state. The concentrations of starting materials and products rise and fall and fall and rise again and again so that the reactions oscillate between different states. Ever since their discovery in the 1950s, mixtures have been devised to demonstrate such reactions and to produce changing patterns of colour (see video).

The archetypal Belousov-Zhabotinsky reaction uses a mixture of potassium bromate, cerium(IV) sulfate, malonic (propanedioic) acid and citric acid with dilute sulfuric acid and gradually oscillates, in a seemingly interminable reaction. It changes from yellow to colourless and back again as the Ce(IV) is reduced to Ce(III) by the propanedioic acid and then oxidized again by the bromate(V) ions as they diffuse and mix through the system. Oscillating biological reactions involving genes that code for pigments in animals have been invoked to explain how leopards get their spots and zebras earn their stripes.

Hitomi Onuma and colleagues have now looked at a Belousov-Zhabotinsky reaction that involves the oscillation of ferroin ([Fe(phen)3]2+) and ferrin ([Fe(phen)3]3+) ions with sodium bromate and malonic acid components. The reaction mixture oscillates between red and blue states in a long-lived oscillating reaction. However, the team found that after about 10 hours, the reaction stops and the mixture turns yellow. It stays this colour without further change until five to 20 hours have elapsed, at which point the oscillation starts again, albeit at a slightly weaker level. The team points out that the zombie reaction is manifest only at certain specific concentrations of sodium bromate and malonic acid, 0.08 and 0.1 molar, respectively, with the catalytic iron ions. Ultimately, after its rebirth, the reaction eventually fades to perpetual thermodynamic equilibrium, the team explains.

This is the longest flat-lining of a non-linear oscillating reaction, the researchers claim. Zombie reactions have been observed as a result of model calculation previously, but they are resurrected after only one to two minutes. The long interval in the oscillating reaction is, the team says, an example of an entirely new dynamic phenomenon.

’The researchers are lauded for the fact that they have kept monitoring the reaction and not prematurely declared the oscillator as dead,’ says Sijbren Otto of the University of Groningen, the Netherlands. ’They have clearly uncovered a new puzzle in oscillator kinetics which will be quite a challenge to solve, all the more as the hibernation of the oscillator takes place in (and is probably limited to) a batch system, where the concentrations of nearly all species continuously change.’ Otto adds: ’The results present a very intriguing example of how complex chemical systems can give rise to completely unexpected and puzzling behaviour. It is an indication of how much there is still to discover in systems chemistry that is new, surprising and counterintuitive.’