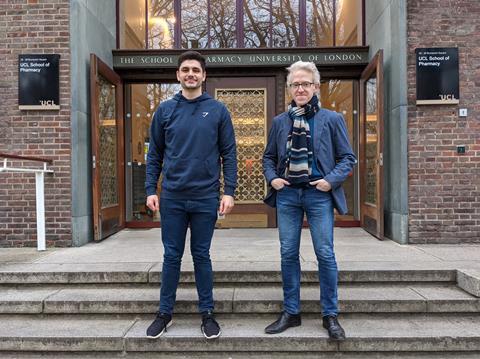 Thomas Knight (left), one of the first Sir James Murray Student Champions, a group named after one of Mat Todd’s (right) crowdsourcing heroes

‘Science is inherently quite secretive as a culture,’ explains Todd. ‘We [scientists] want to make sure that we are known for certain things. So, it’s about managing the two things: the need to share, because that’s better science, versus the need to be in control of what you are disseminating.’

Todd, who is professor of drug discovery at University College London, UK, founded several open source consortia, each aiming to find better medicines to treat diseases that disproportionately affect the world’s poor such as schistosomiasis, malaria, tuberculosis and mycetoma. The central philosophy of each consortium holds that by crowdsourcing contributions from researchers around the world and striving for transparency in all discussions, data and decisions, it might be possible to find new medicines more quickly and cheaply.

To date most crowdsourced contributions have been in the form of scientific advice from experts or the synthesis or biological evaluation of new molecules, but recently Todd has put out a call for a different kind of input – project management.

In his new role as the head of chemistry networks for the Structural Genomics Consortium (SGC), Todd has established the Sir James Murray Student Champions, with the aim of empowering young researchers to take on important roles linked to project coordination, data management, communication and dissemination. Some of these crucial tasks can slip through the cracks in projects with multiple contributors with competing priorities, and it’s hoped that the Champions will mitigate some of these challenges.

‘Local champions act as a central hub for bringing together people with different scientific experiences and expertise and focus their collective brainpower towards a common goal,’ says Thomas Knight, a PhD student within Todd’s research group who is one of the first to take up one of the voluntary positions. ‘This is how big pharma companies operate, and as local champions, we want to try and replicate the efficient industry model of open collaboration and deadlines within an academic environment.’

Knight is coordinating an open project on a potential protein target against Sars-CoV-2. Many of the projects that the Champions will work on are part of the SGC’s ambitious project, Target2035, which aims to find a chemical or biological probe for every protein in the human body; ultimately leading to better treatment and diagnosis of disease.

The Champions are named after one of Todd’s early crowdsourcing heroes, James Murray, who was the curator of the first Oxford English Dictionary. ‘There was a crowdsourcing campaign to identify first uses of words … people read novels and found examples,’ Todd explains. Murray coordinated the entire campaign, receiving such huge swathes of contributions from the public that the post office had to erect a mailbox outside his home. The effort is analogous to the potential benefits that Todd sees in crowdsourcing science: ‘Taking what could be a sort of chaotic avalanche of contributions and making something great out of that.’

Murray’s approach welcomed contributions from anyone, a nod to another aim of open science ­– democratisation. ‘James Murray was very aware of EDI [equity, diversity and inclusion] issues,’ says Todd. ‘He was hoping that he would get lots of inputs from underrepresented sectors. And I think that’s what did happen. He did get lots of contributions from people who maybe didn’t have the kind of academic credentials to contribute in a formal academic environment, but were able to make a huge difference by this other means – mailing things in as contributors. And I guess that resonates quite nicely with the aims of open science.’

The Student Champions are invited to contribute to research papers as authors and learn transferable skills in project management. ‘As an undergraduate, your education mostly consists of being told what to learn and what research to do in the lab,’ says Knight. ‘This project needs us to think broadly in terms of chemistry, but also consider how each person involved can use their expertise most efficiently to make the project run as smoothly as possible.’

Todd and his SGC colleagues are looking for more students to apply to become champions, a role that Knight is enjoying. ‘We are exploring novel chemistry, but it has a purpose, which is to prevent future coronavirus pandemics,’ he says.

Knight is also excited by the collaborative aspects of the project: ‘We are bringing together researchers from different academic institutions around the world who are willing to ignore the “need-to-know basis” way of doing research, and instead are willing to put their research into the world at an earlier stage.’

To find out more about the Sir James Murray Student Champions and sign up, visit the SGC website