A century of isotopes

Once appalled by the military use of his discoveries, Frederick Soddy would pleased by his legacy today, says Mark Peplow

Whenever newspapers use the word isotope, you can be pretty sure they mean trouble. Radioactive isotopes leach inexorably from the shattered nuclear reactors at Fukushima in Japan. Centrifuges are whirring away in Iran, enriching uranium-235 that many fear will end up in nuclear weapons. And November saw fresh claims that former Palestinian leader Yasser Arafat was killed by a deadly dose of polonium-210 – the same isotope that doomed former KGB agent Alexander Litvinenko.

Let’s hope happier headlines will bless Glasgow when it celebrates ‘isotope day’ on 4 December, 100 years after Frederick Soddy coined the word ‘isotope’ in Nature. The University of Glasgow’s Hunterian Museum will host public lectures about Soddy and isotope science, and visitors can also glimpse some of his kit, including an analogue computer made from conical drives and rubber wheels, and a gold leaf electroscope that he built from a biscuit tin. 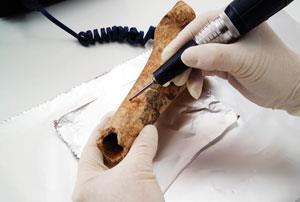 The same, but different

Soddy was a chemist at Glasgow when he did much of his work on the products of radioactive decay. By the early 1900s, he and other scientists had learned that radioactive substances such as radium and thorium transmuted into other elements as they decayed. But some of these new substances proved impossible to separate, even though they clearly had different half-lives. Soddy realised that they were variants of the same elements; chemically identical but with different nuclei. His friend Margaret Todd, a local physician, suggested he call them isotopes, because they occupied the ‘same place’ in the periodic table. Almost 20 years passed before James Chadwick actually discovered the neutrons that differentiate the nuclei of isotopes.

Soddy was a social reformer fascinated by economics, and enthusiastic that science could be a force for good in society. At first, he was hopeful that radioactive isotopes might be tapped as a source of energy. But then the first world war came, with explosives and poisonous gas furnished by science, and Soddy grew pessimistic. He feared that bloated nuclei, straining to unleash their primordial energy, would be used for destructive purposes. In his 1926 book Wealth, virtual wealth, and debt, he wrote: ‘If the discovery were made tomorrow, there is not a nation that would not throw itself heart and soul into the task of applying it to war.’ By the time Soddy died in 1956, he was disillusioned – radioisotopes had been used to kill on an atrocious scale, but without fulfilling their promise in peaceful applications.

Soddy’s discovery had many more benefits for other areas of science. Isotopic substitution is now commonly used to unpick the mechanisms of chemical reactions, for example. Efforts to separate isotopes spurred rapid developments in mass spectrometry, and radiometric dating quickly became a mainstay of geology. More recently, researchers have reconstructed changes in Earth’s ancient climate, the circulation of prehistoric oceans and even the formation of our solar system – all thanks to the stable isotopes in ancient rock or ice that carry a record of the ponderous processes that tease heavier nuclei away from their lighter siblings.

Nuclear medicine also began to blossom in the 1950s. Medical isotopes such as technetium-99m and thallium-201 now illuminate the workings of our internal organs with their gamma rays, while positrons from fluorine-18 enable PET (positron emission tomography) scanners to track metabolic activity with remarkable precision. Since the 1970s, countless lives have been saved by americium-241, slivers of which are held in smoke detectors – any drifting smoke interrupting the flow of alpha particles triggers the siren.

And there is more to come. Pharmaceutical companies are developing drugs in which vanilla hydrogen atoms are swapped for more exotic deuterium, whose bonds with carbon are a little sturdier. This should not make the drug any less potent or selective – but it has the potential to reduce its toxicity and improve absorption. In June, for example, Auspex Pharmaceuticals of La Jolla, California, launched a Phase III

trial of SD-809, a deuterated version of tetrabenazine, to treat movement disorders.

Meanwhile, deuterated odour molecules are offering support for the controversial idea that our sense of smell depends on detecting molecular vibrations, rather than a straightforward lock-and-key interaction with a receptor. In January, researchers showed that humans could distinguish between molecules of cyclopentadecanone with half of their hydrogen atoms swapped for deuterium, which slowed the vibration of those particular bonds without changing the molecule’s shape.

Isotopes will doubtless find ever more uses over the coming century. For although the periodic table now boasts 118 elements, there are around 3300 known nuclides (all the isotopes and their different nuclear energy states). A lot of science happens on that wider playing field, and it can offer enormous benefits to society – something that I think would have delighted Soddy, and given him a very happy isotope day.