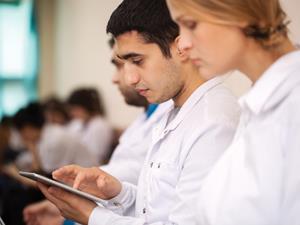 Dire warnings on the state of UK chemistry were sounded by the Royal Society of Chemistry a little over a decade ago. In 2004, the society said that without action – in a worst case scenario – as few as six chemistry departments would still be open by 2014. Fortunately, action was taken and these dismal predictions didn’t come to pass. Instead, there’s further evidence of a welcome resurgence in chemistry with the news that the University of Swansea will reopen its chemistry department in 2017.

The principal reason for the closures was that there simply weren’t enough students to fill the places. On top of this a funding squeeze meant the more costly science courses were a tempting target for administrators. A University and College Union report published 10 years ago found that between 1998 and 2007 the number of chemistry courses on offer fell by 31%.

Why chemistry fell out of favour with students is harder to pinpoint, however. Some speculated that chemistry was too tough and students were opting for softer subjects. But the number of degrees on offer for equally rigorous sciences such as physics and maths only fell by 14% and 8%, respectively, over the same period.

Whatever the reason for students’ indifference to chemistry back then, there has since been a turnaround in its fortunes. Last year the number of undergraduates starting chemistry degrees rose to over 6200, up almost 50% on 2000–01. Initiatives such as the Chemistry for Our Future programme, coordinated by the RSC, played a significant part in this recovery. There were school activities to excite students, undergraduate engagement programmes to improve retention and schemes to help students develop the skills employers want.

These programmes alone are unlikely to be solely responsible for growing interest in chemistry and may reflect a wider societal change – the backlash against so-called ‘Mickey Mouse’ degrees. The debt students now accrue may also have concentrated minds.

In an increasingly tough job market a degree no longer guarantees employment, but those with chemistry degrees are in demand. A recent survey of more than 60,000 job ads in the US found that chemistry was the skill employers wanted in the life sciences and its interdisciplinary nature was what was most valued. It seems that chemistry has a much brighter future in the UK than could have been imagined just a few years ago.