A farewell to chemical arms 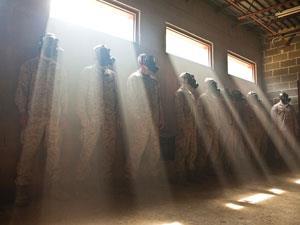 It was a ray of hope in an otherwise unremittingly bleak parade of news from the Middle East: the very last of the chemical weapons declared by the Syrian government in 2013 had finally been destroyed.

But this milestone, announced on 4 January, was almost immediately followed by reports of fresh evidence that Syrians had been exposed to the deadly nerve agent sarin, one of 11 incidents involving toxic chemicals that are now under investigation.

Both of these announcements came from the Organisation for the Prohibition of Chemical Weapons (OPCW), the body that implements the Chemical Weapons Convention (CWC). Their juxtaposition might suggest that the OPCW is fighting a losing battle. In fact, the organisation has been remarkably successful in minimising the threat of chemical weapons since it was estbalished in 1997, with its accomplishments recognised with a Nobel Peace prize in 2013.

What these events do illustrate, though, is that the OPCW’s work is poised to undergo a massive shift – one that will involve the global chemical community more than ever before.

More than 190 countries have ratified the CWC, agreeing to abide by its core tenet that the world should be free of all chemical weapons. Only four states remain outside the treaty: Egypt, Israel, South Sudan and North Korea.

The OPCW’s primary role has been to oversee the storage and destruction of signatories’ chemical weapons stockpiles and any facilities that were used to make them. Up to the end of 2014, more than 60,000 tonnes of the deadliest chemical weapons had been destroyed thanks to the treaty. The main remaining stockpiles are in Russia and the US, which expect to have destroyed all of their chemical weapons by the end of 2020 and 2023 respectively. Consequently, the OPCW will soon further focus its attention from destroying existing chemical weapons towards preventing their creation in the first place.

It already inspects industrial facilities handling chemicals that could be used to produce weapons. Chlorine, for example, is not explicitly banned by the CWC, because it has legitimate uses in sanitation. Yet it is terribly easy to weaponise – in Syria, the OPCW believes helicopters simply dropped barrels of chlorine on civilians last year.

In 2014, the OPCW carried out 241 inspections of such facilities, the most it had ever done in a year. Yet in total, there were 4,851 facilities subject to inspection, showing the huge scale of the challenge.

But changes in the chemical industry, and in academia, can help to make the OPCW’s work easier. For example, the growing use of green chemistry has the potential to reduce the stocks of hazardous chemicals that could be employed as weapons or their precursors. And better tracking of chemical inventories will help to improve safety in the chemical industry and prevent precursor chemicals being diverted into the black market, where they can end up in the hands of terrorists.

These non-state actors must receive greater attention from the OPCW. Detailed methods for producing chemical weapons are widely available, making it increasingly likely that terrorist groups will use them. Isis, for example, used mustard gas in Syria last year with horrific consequences.

Ultimately, the CWC may need to be amended to include a clearer mandate to tackle chemical terrorism. But the OPCW should certainly work more closely with other international agencies to provide the expertise needed to tackle this threat. As the OPCW has found in Syria, this collaboration is particularly important when chemical weapons are deployed in the middle of a bloody civil war, forcing inspectors to work in dangerous conditions.

The OPCW’s workforce covers a broad range of roles, and if the number of those inspectors is likely to grow, so too should the organisation’s analytical capabilities. Portable mass spectrometers, for example, can now give faster results on-site, allowing follow-up sampling and tests to be performed immediately.

Despite the success of the CWC in depleting existing weapons caches, the OPCW must keep the world’s attention on the threat of chemical weapons. For example, 136 of the CWC’s signatory states possess riot control agents (mainly tear gases). These are banned by the CWC if they are used in war, but exempt if deployed by police to control crowds. During mass civil uprisings, the line between the two is particularly indistinct; the OPCW should foster international debate about their use.

More broadly, it should support education drives to ensure that every chemist in the world is aware of the potential for their work to be misused, and the steps they can take to prevent that from happening. It should also provide more training for authorities to prepare for chemical attacks, and to the first responders who must deal with the immediate aftermath. This should focus on unstable regions, countries where this provision does not currently exist, or those areas with burgeoning chemical industries.

And although bringing states like North Korea into the CWC may appear to be a hopeless task, the OPCW should nevertheless help to ramp up international pressure on the four hold-outs to join the convention. It is certainly no panacea – but it is surely better than simply turning our backs on the horror of chemical warfare.