Could the Shroud of Turin’s mysterious negative imprints have a chemical cause?

Chemical photographic film was developed over a century before physical photodiodes took over. Nearly all of this development was concentrated on an interesting photochemical reaction. A white or transparent silver halide crystal, hit by a few photons, decomposes to black metallic silver. A lot of clever chemistry went into preventing this reaction from simply reversing itself in the dark, and amplifying it so that even those few photons created a lot of local blackening. The outcome was basically a negative image – the brighter the light, the darker the resulting local patch. Accordingly, a second photographic process was required to reverse everything again, so that the original negative could yield a faithful positive print. 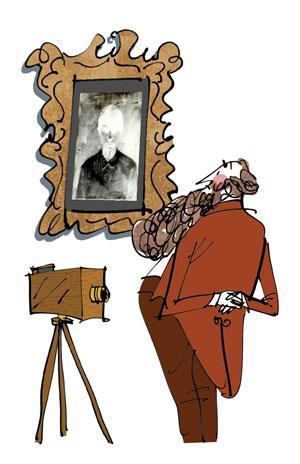 The entire concept of negativity seems to have come out of photochemical technology. None of history’s most prominent artists ever tried to paint a negative image. Some experts in moving pictures can look at the ‘rushes’ of negative film straight from the movie camera, view them, and judge whether they are worth reprocessing to a positive moving image (some directors still like to make films on chemical stock. They claim a subtle ‘chemical quality’ cannot as yet be imitated by electronics). And I know at least one fictional story which depends on a photographic negative that is unintelligible until a positive print is made from it.

The most provocative example of negativity is perhaps the Shroud of Turin. This has been claimed to be the burial cloth that covered the corpse of Jesus after his crucifixion. In 1898 it was displayed in public, and several photographers took pictures of it. They discovered to their amazement that the negatives seemed to show a remarkably realistic face and body. The positives made from such negatives merely presented the Shroud as a piece of stained cloth. During the public display, two local artists painted copies of the Shroud. They seem not to have gone in for true intensities, for photographs were taken of those copies; if the artists had made their image densities accurate, the photographic negatives should also have revealed that realistic face and body, but in fact they showed nothing special.

What chemistry could have imprinted that negativity? One theory is that, in accordance with Jewish burial rite practice, the Shroud was treated with a composition of myrrh and aloes in olive oil. If the body was covered in sweat, and that sweat contained urea (which are both likely for a body which had suffered the agony of crucifixion) then the decomposing urea might have evolved ammonia gas. This could have reacted with the substances placed on the Shroud, and given it the right sort of staining. Places far away from the body, where the ammonia might have been diluted or diffused away, should be relatively light on the cloth, and therefore dark on its negative. Places closer to the body should come out relative white on the negative. Gaseous molecular diffusion is an uncertain process, easily disturbed by tiny local air currents. I can imagine experiments to discover whether it could generate an image anything like the one given by negative photography.

However, radiocarbon dating of the cloth puts the Shroud at roughly 1300AD (which is also about the time when it enters history at all reliably). So this bold theory may well turn out to be negative!