A war on smog

Chemistry can be a force for good in tackling China’s pollution, says Mark Peplow

You don’t have to be a chemist to know that China has a pollution problem. Many of its waterways have been contaminated by discharges from factories, and Beijing is frequently shrouded in thick, choking smog.

Growing public concern over the state of the environment has forced officials to take action. And where chemistry has often been seen as the villain of the piece, it is now set to play a vital role in cleaning the country’s air. 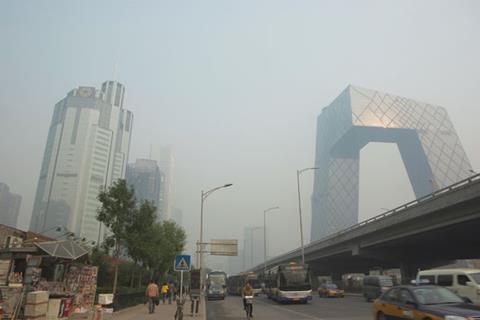 In March, Premier Li Keqiang announced that the country would ‘declare war’ on pollution, adding that smog was ‘nature’s red-light warning against inefficient and blind development’. Last year, the country’s Action Plan for Air Pollution Control committed 1.7 trillion yuan (£179 billion) to the task by the end of 2017. Much of that funding will go towards upgrading the coal-fired power plants that generate about 70% of China’s electricity.

Particle filters could make a significant dent in the primary emissions of sooty particles, but the smog also brews its own PM2.5 by oxidising gases into sulfates and nitrates and blending them with volatile organic compounds. The reactions involved are not much clearer than the smog itself – and that’s where the chemists come in.

Air pollution models typically combine measurements of primary emissions with these secondary processes, and then assess the outcomes under different meteorological conditions. Such models can help to determine the origins of the pollution and guide officials in deploying the most effective ways to tackle it.

For example, if weather conditions present a high risk of severe smog, then factories and power plants could be idled and citizens warned. The data behind these models also help to build up the evidence base needed to set air quality targets.

All smogs are not created equal, however. London’s infamous pea-soupers were industrial smogs, thick with soot and sulfur dioxide from coal-burning. Mandating that some households burn smokeless fuel and moving power stations away from cities helped to clear the air.

In Los Angeles, first hit by smog in the 1940s, those tactics did not work. Chemists eventually realized that LA’s smog was a vast photochemical reactor. Sunlight caused volatile organic compounds to react with nitrogen oxides from combustion, producing copious amounts of low-level ozone and other compounds that caused health problems and widespread crop damage. The solutions included catalytic converters to cut exhaust and power plant emissions, as well as improving combustion efficiency.

Beijing’s smog combines the two. Like LA, Beijing is mostly surrounded by mountains that form a natural reaction vessel for the smog. But the air also boasts sulfur dioxide, carbon monoxide, and even ammonia, more like London’s industrial cauldron.

LA managed to cure its smog problem without reducing the number of cars on the road – instead, it targeted the worst polluters and cleaned up their emissions. This seems to offer the most practical approach for China. The country’s booming growth in car ownership is unlikely to abate, and although Beijing tries to constrain its millions of drivers – roughly half their vehicles are kept off the roads every workday – some citizens simply circumvent the rules by purchasing a second vehicle.

To tease apart the impacts of different polluters and their emissions, the Chinese Academy of Sciences (CAS) initiated a major smog research project in 2012 that now involves more than 300 scientists and engineers.1 The effort is already bearing fruit: in February, researchers reported that nitrogen oxides and airborne mineral particles catalyse the conversion of sulfur dioxide into sulfate, significantly increasing PM2.5 concentrations in the air.2 That finding shows that authorities should prioritise reducing vehicle’s nitrogen oxide emissions.

The CAS has now unveiled plans for the world’s two biggest smog chambers. At a cost of 500 million yuan for the pair, each will have a volume of about 300m3, some 50% bigger than the European Photoreactor, Euphore, in Spain. (Bigger chambers tend to offer more realistic simulations by minimising the effect of chemical reactions on the chambers’ walls.)

Bristling with analytical instruments, they should allow side-by-side comparisons of different atmospheric conditions, and help identify short-lived chemical intermediates such as hydroxyl radicals that are important players in smog chemistry.

Chinese citizens have successfully campaigned against chemical factories that they fear will further destroy their environment. But there is a growing risk that many will come to equate chemistry with pollution, as so many have in the west. Given the legacy of China’s poorly regulated industries, who can blame them?

Now is the time for chemists to show that their discipline is essential to monitor the environment’s health – and deliver a cure.