A witches’ brew for trifluoromethylation

Moving from an academic to an industrial environment has definitely given me a different perspective on synthetic methodology. It has also rapidly highlighted my naivety about reactions that I had presumed to be trivial, but are in fact not so.

Trifluoromethylating phenols is one example of a reaction that would be incredibly useful when attempting to tune the chemical and biological properties of molecules for pharmaceutical and agrochemical research. Despite the general triviality of alkylating phenols with electrophilic reagents, and the availability of several user-friendly electrophilic ‘CF3’ sources, this reaction has, until recently, been elusive.

Fortunately, Feng-Ling Qing and a team at the Shanghai Institute of Organic Chemistry, China, have now developed a method – using what can only be described as a witches’ brew of ‘fluorine’. At the outset, the team proposed that by employing a transition metal, they would be able to develop a catalytic coupling reaction using a nucleophilic source of ‘CF3’, in this case the Ruppert–Prakash reagent (CF3SiMe3). By switching to a nucleophilic CF3 source, instead of more intuitive CF3 electrophiles, the team can avoid the harsh conditions that would likely be needed to generate highly unstable CF3 cations. 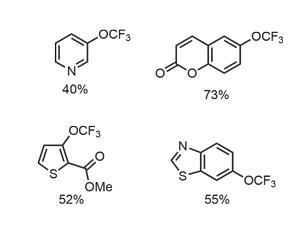 Taking 4-hydroxybenzoate as the model substrate, a presumably momentous screening effort identified functional reaction conditions. The cocktail comprises silver(i) triflate and 2-fluoropyridine (which is presumed to be a ligand) with an optimal oxidant mixture of N-fluoro­benzenesulfonimide (NFSI), Selectfluor, caesium fluoride, and a blend of toluene and trifluorotoluene (who would have thought!) as solvent. This gives the product in a more-than-acceptable 77% yield  at room temperature (figure 1). Excluding the solvent, a remarkable 53 molar equivalents of fluorine atoms are present in this cacophony, but with few alternatives this transformation will nevertheless find its way into researcher’s toolboxes.

The team moved forward by demonstrating the reaction on several electron-deficient phenols, including potentially sensitive coumarin substrates and a thiophene derivative (figure 2). Electron-rich phenols predominantly generate arylsulfonates under the standard conditions, but adding 2,4-di-tert-butylphenol inhibits byproduct formation and allows important substrates, including halogenated phenols, to react. Nitrogen-containing heterocycles as substrates proved problematic, presumably due to the metal catalyst coordinating the nitrogen atoms. Not to be beaten, Qing and the team introduce more fluorine to the reaction mixture, in the form of trifluoro­methanesulfonic acid, forming pyridinium salts in situ and enabling the reaction to proceed in acceptable yields. 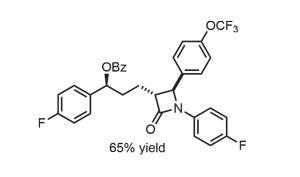 Despite the complexity of the reaction mixture, the team courageously offers a potential reaction mechanism. Probing experiments clearly support the formation of a catalytically active Ag(i)CF3 species. The researchers propose that oxidative addition of Selectfluor or NFSI to Ag(i)CF3, followed by fluoride–phenoxide exchange and subsequent reductive elimination from the silver(iii) centre would give the reaction product. While this is potentially feasible, and experiments appear to rule out a radical mechanism, it is hard to suggest that this is even close to the reality of what is going on in such a complex mixture.

This work is unquestionably important, although it would have been preferable if the authors had demonstrated the reaction of more complex molecules, rather than steroid derivatives and a drug molecule with limited functionality (figure 3). This unfortunately leaves open the question of whether the reaction is truly useful for late stage functionalisation of complex molecules. Further exploration of the impressive reactivity of heterocycle-containing molecules, and defining the limits of the reaction will greatly facilitate the application of this work.