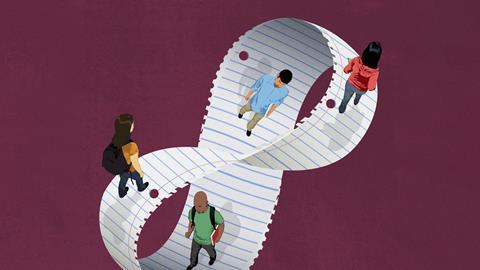 There’s a difference between helpful fictions and arbitrary questioning

In these times of enforced home education, the school curriculum is likely to come under closer parental scrutiny than ever before. What will professional scientists make of it? I was stopped in my tracks by a question on a GCSE physics paper, which showed a drawing of an experiment with spring and weights that was supposed to test Hooke’s law, the linear proportionality of force to extension. The ruler to measure the spring’s extension was shown placed behind it at a slanting angle; the student was asked to explain why it was important first to set the ruler upright.

Checking out GCSE physics papers for my daughter is interesting. This for example: the experiment is designed simply to test the hypothesis that displacement is proportional to weight. I can think of various answers, but which do you think they're looking for? pic.twitter.com/ygJ5oyCz6N

It seemed a bizarre question, to which I couldn’t imagine which answer the examiners were seeking. When I tweeted it, my puzzlement seemed justified. Some wondered if the ruler would fall over (it wasn’t clear if it had been fixed in place). Some wondered if this was about repeatability – if you wanted to replicate your findings, you’d struggle to get exactly the same angle again. One smart GCSE student I asked started to formulate an answer in terms of scalars and vectors, and a few respondents worried that the results wouldn’t be valid if the ruler was not aligned with the direction of the gravitational force.

Some scientists, forgetting the stated aim of merely demonstrating linearity, said it would introduce the added burden of trigonometry to calculate the true extension. The most succinct answer was (expletives deleted) ‘Because that’s not how you use a ruler, idiot!’ Tellingly, one university lecturer in physics denounced it as a thoroughly daft question, while another pointed out that a good question for the able student could be ‘Why is it not important to put the ruler upright?’

But what troubled me most was the response of an educator who couldn’t see what the fuss was about. The students know what to say because we’ve told them, he said. Don’t overthink it – this is just testing awareness of ‘good use of equipment’. And if professional physicists have a problem with it, they’ll catch up eventually.

I got an almost identical response from another educator a few months earlier when I tweeted a similarly baffling question in a maths paper: 12 – 2×4 + 3 = ? Inevitably, many others replied on that occasion by invoking the BODMAS mnemonic for the order of operations (or variants thereof). But a similar question ‘broke the internet’ and provoked an editorial in the New York Times a year ago when people who had learnt different schemes of this sort insisted only their answer was the right one. My concern was that people who had been taught some arbitrary system for resolving an arithmetical sum of the kind only encountered in exams – and which a real mathematician would never write – were evidently under the impression that what they had learnt was a fundamental rule of maths.

But we have to teach students something, because they always forget to add disambiguating brackets, said the educator. So why not teach them never to write an ambiguous equation? Because they’ll never learn that, the educator insisted, adding in effect that I should go back to the academy and let teachers do their job.

It is of course hard to avoid having to teach students simplifications that aren’t strictly correct, especially in science, because the full story would be too overwhelming. Mathematician Ian Stewart and biologist Jack Cohen coined the term ‘lies-to-children’ to describe such convenient fictions; in collaboration with author Terry Pratchett in their book The Science of Discworld, they defined these as ‘a statement that is false, but which nevertheless leads the child’s mind towards a more accurate explanation, one that the child will only be able to appreciate if it has been primed with the lie’. Ernest Rutherford’s solar-system atom or Gilbert Lewis’ octet-rule atom are examples, and in fact chemistry might be more replete with them than other sciences – think of those unrealistically neat divisions into ionic and covalent bonding, or how oxidation states are first explained.

My suspicion is that the education system is riddled not so much with lies-to-children (which we probably have to live with) but with questions and schemes that are truly arbitrary, pointless or plain wrong, invented simply to see if students can memorise and regurgitate what they are told. The ruler question is one of these, and so is BODMAS and the infamous fronted adverbial – a grammatical term no writer or grammarian ever used, since it was invented solely for teaching.

Educators are surely right to say that special tools are needed for the classroom, and that these will necessarily sometimes be blunt. But when those tools don’t merely simplify but actually conflict with professional practice and confuse the more knowledgeable student, something has surely gone awry.