In science, not all forms are created equal 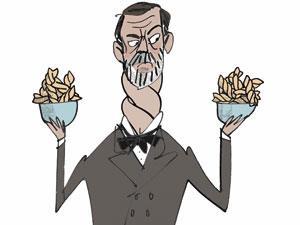 One of the greatest chemical experiments was a crystallisation performed by Louis Pasteur in 1848. When crystallising ammonium sodium tartrate, Pasteur noticed that the little crystals seemed to come in two forms; one like a right-handed screw, and the other like a left-handed screw. With a lens and some tweezers, he sorted his crystals out into the two types. He dissolved each pile in water, and tested the solutions in a polarimeter. The right-handed lot twisted the plane of polarised light one way; the left-handed lot turned it the other way. Pasteur had resolved an apparently optically inactive compound into two optically active components! The result was so surprising that the French Academy of Sciences made Pasteur repeat the experiment in front of Jean-Baptiste Biot – who had first observed that tartaric acid could rotate polarised light – before it would accept the finding. Since then, many potentially optically active crystalline compounds have been examined for this same effect that Pasteur observed; only nine have ever been found.

Few chemists can have looked at crystals as perceptively as Pasteur did on that occasion but there are other instances of asymmetry all around us. I once bought a pack of fusilli pasta in a supermarket as a result of a similar observation. Fusilli pasta is the type that is shaped in a screw-thread form; and I had noticed that some fusilli in a pack were like right-handed screws, and some like left-handed ones. Back home, I sorted my pack out into right and left-handed forms; it turned out to have about 50% of each. I then played around making packs of each form. I suspected that a two-form pack would be less dense than one containing a single form. The packs seemed not to have any claim on them about their volume or the weight of their contents. By packaging the forms together, I thought, the manufacturer was cleverly reducing the bulk density, and hence the amount in a pack. Pasteur was much in my mind.

However, any effect was extremely small. A racemic mix of fusilli seemed to make a bulk solid of much the same density as fusilli of a single handedness. The manufacturer was not being clever, and Pasteur was not alive and well in the pasta market.

Handedness, of course, is not confined to pure chemistry but gets into biochemistry as well. The amino acids of life, or at least life on this planet, are all left-handed and the origin of this is still the subject of much research. Some microorganisms, however, use this asymmetry to their advantage, and many bacteria weave their cell-walls from both left and right-handed amino acids, so as to be indigestible to conventional predators. To do this the microorganisms use the enzyme alanine racemase to convert some of its natural l-alanine to d-alanine. However, the starting material is still the more common form and d-amino acids have not yet conquered this world. We can perhaps deduce that once an asymmetry is well established, it is hard to challenge. This may also be why all the subsequent fusilli I have studied have been right-handed – perhaps the left-handed form has never established itself in the world of pasta.

The biggest asymmetry of them all, of course, is that the atomic nucleus is positively charged, while the small electrons that orbit it have a negative charge. The opposite arrangement seems equally feasible, yet such inverted ‘anti-matter’ is never found in nature and indeed would react violently with normal matter. The spacecraft of the TV series ‘Star Trek’ is alleged to be powered by an ‘anti-matter drive’ and Harold Furth wrote a tragic poem ‘Perils of Modern Living’ describing Edward Anti-Teller, and the disaster that occurred when he shook hands with his opposite number! Luckily, I suspect my pasta supper is safe.