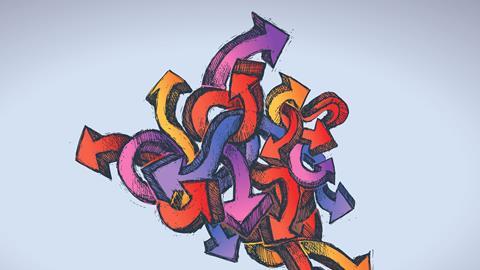 Beyond the transition state

How reactants transform into products is the central question of all chemical change – and a complex one. A full analysis of even a simple reaction has to take into account not only all the degrees of freedom of the molecules concerned but also how they are influenced by their environment.

It’s surprising in retrospect that the old approach – traditional transition-state theory – did as well as it did. It sought to collapse this high-dimensional and stochastic process into a one-dimensional problem where the reactants change along a single ‘reaction coordinate’, first energetically uphill to the transition state and then downhill to the products. Those who learnt this view might recall some vague unease at the arbitrariness of both the transition state – why this arrangement of atoms? – and the reaction coordinate, which never seemed to get defined.

The ability to simulate reactions from quantum first principles has somewhat negated that arbitrariness: we can now insert all the ingredients into a numerical model and see what happens. One problem then, however, is how to collapse the high-dimensional model into a comprehensible view of the reaction pathway. What’s more, there’s the issue of representativeness. Not only will there be a whole ensemble of possible reaction paths, but there’s no guarantee that simulations will pick up rare events in a realistically finite time. A big step forward was the ‘transition path sampling’ method that could accommodate such rare events.1 This approach led to transition-path theory, which allows rate constants to be calculated without any simplifying assumptions of a unique reaction trajectory or transition state.2

Still, the new picture threatens to become one in which a reactant wanders about randomly in its vast phase space and just occasionally pops over into the potential valley of the product, with little sense of what it takes to get there. Within transition-path theory, this process is often described with reference to a so-called committor, a measure of how likely it is that a given microstate of the system will end up as the product. The committor then takes up the role of a reaction coordinate: the further the system is along it, the more likely it will generate the product.3 But what is the committor – a kind of integrated measure of countless possible reaction paths – really measuring?

Miranda Louwerse and David Sivak of Simon Fraser University, Canada, offer an answer. They say that the committor really distils all the information that the dynamics of trajectories encode about where they are headed – specifically, whether or not they will generate the products.4 This information can be exactly equated with the amount of entropy production that occurs within the ensemble of such ‘reactive’ trajectories that do lead to products.

Let’s unpack this. At any moment, a reactant molecule A is in some state in the high-dimensional phase space of the system. But we won’t know in general if it is just bouncing around before ultimately returning to its initial state, or on course for becoming product B. Even if the state has crossed a potential-energy ridge separating the A valley from the B valley, fluctuations from the environment could send it back again.

The more entropy is produced, the more we learn about where it is going to end up

Among all the possible trajectories, there is a subset that definitely leads from A to B. In general, we don’t know a priori which these are. But we could find out by conducting a bunch of simulations and grouping those in which the reaction happened. This ensemble of reactive trajectories will be governed by the second law of thermodynamics: it will generate entropy and will be irreversible. Louwerse and Sivak show that the amount of entropy production within this reactive ensemble is equal to the amount of information we can gather about whether the system is heading towards B and not, say, just wandering circuitously back to A. The more entropy is produced in this set of trajectories, the more we learn about where it is going to end up.

There might be many components to that information: how weak this bond has become, how vibrationally excited that one is. But the notion of a committor, the researchers say, collapses all those reaction-relevant modes into a single variable: one that is maximally informative about where the reaction stands, yet without privileging any given reaction pathway or ‘transition state’.

This implies that the dynamical modes that matter most to the A to B reaction are the ones that, in the ‘reactive ensemble’, generate the most entropy. In principle they can be calculated, at least for some systems.5 One might imagine, for example, using this approach to calculate the kinetics of protein folding. And once you know what the key modes are, you might even be able to design molecules that favour them – and which are therefore more likely to generate the desired products.