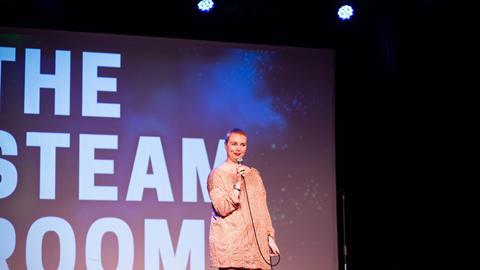 It’s no joke: scientists and comedians are collaborating to share research

An astrobiologist, two comedians and an urge to communicate science to the public walked into a bar… well actually, they met up for dinner. And the result? A sell-out Sydney Comedy Festival show uniting scientists and comedians in front of rapturous audiences.

The Steam Room concept was created by Luke Steller, a PhD student in the Australian Centre of Astrobiology at the University of New South Wales (UNSW) and the co-founder of the Praxical science communication and creative collective.

Steller was inspired to create the Steam Room while watching friends working in comedy. ‘I saw them be brilliant communicators on stage and within a few seconds [they could] engage an audience and have them hooked and interested and wanting to know more,’ he says. ‘And I thought, why can’t scientists be this engaging? Why can’t scientists have fun on stage?’

A beautiful monster of an event

Steller won a National Science Week grant to help realise his comedic vision, but Covid-19 lockdowns and restrictions meant the project took a little longer to launch than originally planned.

The pause allowed the space and time for Steller to share his idea over a dinner with friends Ru Halwala and Tom Stevenson, who had just set up their production and performance duo Scary Strangers.

‘It just seemed like the perfect sort of moment where we were like, “Why don’t we all work together and see if this thing can happen?” … and it turned into this beautiful monster of an event,’ explains Halwala.

Rather than programming the event as part of National Science Week as planned, the Steam Room was launched as part of Sydney Comedy Festival. Steller explains that this was a deliberate decision to try to find a new audience outside the ‘science echo chamber’.

The scientists had been very well prepped though. ‘We hosted three two-hour improv workshops at our studio to start, and then we all met up at UNSW and we did a full-day workshop with a stand-up comedian,’ says Halwala. ‘Then we had weekly rehearsals leading up to the show itself, where we were really workshopping the materials … and we were also giving them tips in between and stuff they could do at home.’

For Halwala and Stevenson, the collaboration was their first time working with scientists and one they really enjoyed.

‘The first thing that struck me about working with scientists was their humility,’ says Stevenson. ‘They were so trusting and willing to just go with what we asked them to do, and a lot of it was really out of their comfort zone.’

Samantha Young was one of the scientists performing as part of the show following a successful application via a Facebook ad. Although comfortable on stage in different guises, Young was new to comedy. ‘That was very scary,’ she says. ‘We’re really lucky that Luke organised the workshops … I don’t think I would have been able to do it without those.’

Young’s PhD was in reproductive biology and genetics and she found the words of her former advisor playing on her mind in the lead up to the event. ‘I think he was quoting someone else though I don’t remember who, [when he said]: “Scientists defy physics in that they rise with gravity and fall with levity,” so he was always encouraging me to be more serious, so that I’d be taken more seriously,’ she shares. ‘That’s always been a fear ever since, because that is really the state of science … the more serious you are, the more seriously you’re taken.’

It was important for Steller to perform as part of the show as well as producing it, to show colleagues he was willing to take the plunge while gaining an understanding of the format and developing his own science communication skills. For him, there’s one aspect in particular that demonstrates why Steam Room has been such a hit.

Correction: This article was updated on 13 July 2022 to correct the spelling of Luke Steller’s name