Carl Djerassi thinks he may be the oldest professor still teaching in the winter quarter at Stanford university, US. But despite a long and venerable career as an organic chemist – he was most famously involved with oral contraceptives, but has also worked on corticosteroids, natural products and physical methods – he now teaches an interdisciplinary seminar on science and theatre. Ben Valsler spoke to him about his artistic life.

You had a distinguished career as a chemist – what caused you to move over to writing fiction?

I changed my career, really my intellectual life, at an unexpectedly late stage: in my middle or late 60s. I really decided it would be interesting to lead a totally different life – that of an intellectual smuggler.

It was my work dealing with the pill and contraceptives which made me realise that one has to communicate scientific discovery, if one talks about the social consequences of it, with a very broad public and in a very different manner from which scientists are accustomed to. Many of them are either not interested in what you have to say or they are afraid of it, or they claim that they won’t understand it and they don’t listen even if you try to explain.

So therefore, I thought I would smuggle it. I will hide it in what I initially called ‘science-in-fiction’ to differentiate it completely from science fiction. In other words, everything I describe in a pseudo- or quasi- fictional context is, in fact, either true or plausible. I don’t violate the second law of thermodynamics, I don’t have perpetual motion machines and things like this, which could be very amusing and interesting in science fiction, but really don’t work for my purposes.

I wrote five novels, four of them in the science in fiction category which should, as such, be interesting, exciting, hopefully well-written ones that people like to read. But when they’re finished, they’ve learned something without knowing that.

After I did this for about 15 years, I was by that time in my middle 70s. At that time, I was commuting between San Francisco and London. London, of course, is the theatre town. I’ve been going to the theatre for decades and I probably see 30 plays a year, so I’ve seen hundreds of plays. I see primarily intellectual plays. I’m talking about Tom Stoppard or Alan Bennett – I don’t really go to musicals or to belly-laugh comedies.

I had no intention of writing for the theatre at that time and I still remember, in 1996 at the Cottesloe Theatre of the Royal National Theatre, seeing Stephen Poliakoff’s Blinded by the sun. A play that people don’t remember very much anymore, but that was one of the really pure chemical plays – and there are very few chemical plays – which dealt with the cold fusion debate.

At that time, I didn’t know that Poliakoff was a brother of the physical chemist Martyn Poliakoff and that explains why he really rather well presented the idiosyncratic behaviour of scientists. I remember going out of the play and telling my wife, ‘I’m going to write a play now’. Not because of Poliakoff, but because at that time, I was talking in particular about sex in an age of mechanical reproduction, the divorce of sex from reproduction – I said, ‘I’m going to write a play about it’.

That play turned out to be An immaculate misconception, which opened at the Edinburgh fringe in 1998 and was quite a success. The BBC highlighted it on Edinburgh nights and on the BBC World Service. Now, it’s been translated into 12 languages and performed in many places.

I got hooked. I got hooked for the following reason and that’s a very important one: We scientists, since the 17th century – you could almost say since Galileo or Bacon – we’re not able to write in dialogic form anymore. From the Greeks to the 17th century, people wrote a lot in dialogic form. I don’t mean theatre plays, but dialogue as a literary genre, that has pretty well disappeared. The only remaining vestige of that is theatre writing.

The first few [of my plays] all dealt with science, so that was An immaculate misconception and the second one Oxygen, which I wrote with a famous chemist, Nobel laureate Roald Hoffmann from Cornell [university, US].

The third one is called Calculus… it dealt with the scandalous behaviour between Newton and Leibniz as to who invented calculus. I, quite frankly, posed a very brutal question. It’s perhaps somewhat impolite to say, but can a person be a shit as a person and a great scientist? The answer with Newton is categorically yes. In fact, it is true with others as well and that is a serious problem. 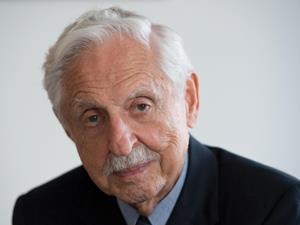 I really consider it one of my best plays because I did an enormous amount of research on the famous conflict where Newton, the most powerful scientist in Britain – also master of the mint, president of the Royal Society – was obsessed by competition. Whether it was with Hook, whether it was with Flamsteed, and particularly with Leibniz; in each case, he wanted to be first. He appointed an anonymous committee of 11 fellows of the Royal Society who would then judge who was first. What very few people knew, but is also documented, [is that] he then wrote the report and gave it to that committee.

I really focussed my fiction and my plays much more on the behavioural and cultural aspects of scientists. In other words how we behave, rather than what we do. Because for what we do, of course, there are plenty of very good science journalists who describe how we do science. But to describe how we behave, you need to be an insider. And you have to be an insider who is willing to wash dirty lab coats in public. It’s my own lab coat too, so I’m not a muckraking journalist who talks about ‘them chemists’. No, I write about ourselves. It’s a collective mea culpa in part, but not entirely mea culpa because many of the idiosyncratic aspects are also very positive ones.

We are a discipline which is probably the most collegial of them all. At the same time, the most brutally competitive, and that combination is very important one. The other one is ambition. No question. We want to be first. We have an Olympic game, you might say, in which there’s only a gold medal, there are really no silvers or bronzes.

That kind of ambition is both nourishment for the 70- or 80-hour work weeks that many scientists lead, but at the same time is also the poison. It is this balance between nourishment and poison – which is a very tricky one, a very important one – which I’ve been trying to solve, probably unsuccessful in my own life, but I’ve tried to demonstrate and really describe in my plays and in my fiction.

Do you think a career as a scientist trains you to work and to think in a particular way? Has this affected the way that you’ve approached writing fiction and writing plays?

I think not really, except in one context. We are scientists because we are curious. That is invariably the first motivation for someone to go into science.

I’m basically an extremely curious person. And that curiosity does reflect itself in the type of plays that I write and what I’m curious about. I would say I’ve come up with new things. There’s no question that my Calculus play about Newton and Leibniz contains very interesting new material.

But when it comes to style, the answer is categorically no. Because as scientists, we write purely for information transmittal and we are supposed to be precise. What absolutely counts is content, and style comes second. You can write an extremely good scientific paper in very poor style and still, it will be considered a great paper if the science is great. If the style is great but the science is mediocre, that’s a mediocre paper.

That is not the case in literary writing where style in the broadest context is very different. You have to hide information transmittal. Even if you’re interested in it, that has to be hidden. It does not have to be clear or people will call it didactic and didactic is the most insulting term in any book review. I’m fully aware of the danger, and of the danger of even admitting to having didactic motives. But you know, I’m old enough to be able to do this and say, ‘Well, what the hell!’

Your intention when writing science-in-fiction is to communicate information about a scientific topic, to smuggle it in under the radar. Most fiction authors don’t have these intentions. Do you judge the success of a book or play on different parameters from other authors?

Entirely. I don’t write bestsellers by definition, but I write long sellers. A good example is that the first volume in my science-in-fiction tetralogy, Cantor’s dilemma, is now in its 28th or 29th print run. It’s still being reprinted every year.

It’s used partly in colleges and universities as recommended reading. But it particularly tells youngish scientists – by young, I mean people in their 20s – what it’s really like to go into science. [It deals with] universities, graduate students, post docs, professors; misbehaviour as well as attractive behaviour. I wrote it in 1990, it’s still completely up to date and very relevant.

Dialogue in fiction allows us to put ourselves in someone else’s shoes and explore those ethically ‘grey’ areas. Would you like to see more attempt put into populist drama, such as soap operas, to try and approach some of these ethical situations?

We are not all Strangeloves or Frankensteins, idiot savants or nerds

But there’s another problem. Everything I have told you sounds rosy, but in fact, theatres in the whole are very suspicious of things dealing with plays [with scientific content].

There are some huge successes. Copenhagen by Michael Frayn will be one example. Blinded by the sun by Poliakoff, for instance was a very good play but it was not a huge success. I don’t think it ever transferred beyond the Cottesloe.

There are plays that one could call science plays, things like Tom Stoppard’s Arcadia. That is not a pure science play, but it has science within it: it deals with Fermat’s last theorem. It has some idea of chaos theory in there.

I think that theatres – and I found this to be the case in most places –are suspicious. They feel that we scientists … are taking over the world, and now, we want to move into the theatre and take it over there too. You see very few plays that make it onto the big stages, no question whatsoever.

Many of my lectures – there’s one that I giving next week for instance that’s called ‘what can science do for the theatre versus what can the theatre do for science?’ Well, I’m interested of course in the second. … And not so much of science itself, but scientists. I really like to show that we are, perhaps not ‘normal’, but interesting people. We are not all Strangeloves or Frankensteins, idiot savants or nerds, but we also cover a Gaussian distribution curve of behaviour where the middle of it is an interesting one that most people are unfamiliar with and could find quite interesting.

Read more about where science meets art in our themed issue