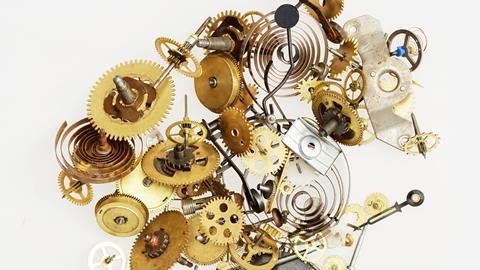 Erwin Schrödinger’s 1944 book What Is Life? is better known today for its answer than its question. Famously, Schrödinger proposed the concept of a code-script encoded in an ‘aperiodic crystal’ that enables life to avoid the disordered fate seemingly demanded by the second law of thermodynamics. That script, the conventional story goes, turned out to be the genome sequence in an organism’s DNA.

But what puzzled Schrödinger about life was that ‘only in the co-operation of an enormously large number of atoms do statistical laws begin to operate and control the behaviour of these assemblies with an accuracy increasing as the number of atoms involved increases’. How can organisms exhibit predictable and orderly structures and behaviours if they are based on physical and chemical laws that are statistical, such that one might expect any orderliness to be ‘perpetually disturbed and made inoperative by the unceasing heat motion of the atoms’?

Even if you buy the idea of a genome as a code-script, it doesn’t solve that problem. Schrödinger acknowledged as much, saying that some ‘new type of physical law’ was required that can generate ‘order from order’, producing large-scale regularity from the information in the chromosomal code-script without falling prey to the molecular disorder surely present in the warm, wet environment of the cell. He speculated that perhaps his aperiodic crystal was sufficiently solid and large to bear comparison with a cog in clockwork. But that’s not so. Not only does DNA thermally fluctuate as much as any molecule, but the smaller molecular parts it encodes – RNAs and proteins – are even more subject to the stochastic contingencies of their generation, diffusion, interaction and degradation. Concentrations and expression rates can fluctuate, for example, and many interactions are non-specific. There can be no clockwork in an environment as noisy as the cell.

How robust, reproducible and predictable behaviour ever emerges at the level of cells and organisms remains a puzzle even today. A part of the answer might be hinted at in a preprint by Renzo Comolatti of the University of Milan, Italy and Erik Hoel of Tufts University in Massachusetts, US.1 They have investigated the notion of ‘causal emergence’, which has been invoked in fields as diverse as meteorology, economics and neuroscience. While ‘emergence’ is one of those buzzwords of complexity studies that can feel more like an incantation than a scientific principle, causal emergence has a fairly precise meaning that can be quantified. It refers to the way in which, for some complex systems, the real cause of a phenomenon or behaviour must be attributed to higher levels of organisation rather than being a sum of lots of microcauses produced by the smallest components.

Comolatti and Hoel show that causal emergence appears for more than a dozen independently proposed measures of causation. If it is not a genuine phenomenon, they say, then not only must we conclude there is something wrong with all of these measures, but the whole idea of ‘cause’ must have some very odd and non-intuitive properties. Causal emergence doesn’t just mean that we can conveniently carve up the complex system into meaningful large-scale aggregates of the microscopic particles and talk about those instead in our explanatory mechanism. It also gives these systems a valuable new property: insensitivity to microscale noise.

In other words, in systems whose behaviour is causally emergent, there is no requirement for every microscale component to be in just the right place at the right time. Living systems are probably the paradigms of causal emergence: just as a cell doesn’t depend on any precise configuration of proteins and RNAs, so an organism doesn’t require some ‘perfect’ arrangement of cells. Contra Schrödinger, this means that life is the opposite of clockwork – for a truly clockwork mechanism is not causally emergent at all. Remove any random cog from a watch mechanism and it will almost certainly stop functioning. The reason watches don’t need causal emergence is that such fluctuations won’t happen spontaneously for macroscopic clockwork parts; for molecular systems they are inevitable.

There is an important lesson here for molecular nanotechnology and the engineering of complex molecular systems. Much of the dialogue of this field tends to be couched in mechanical terms, or alternatively in the language of electrical circuit engineering. The paradigm is that functionality will arise from the precise interlocking – either metaphorical or literal – of very many molecular parts. Where stochastic motion is recognised as a challenge, the instinct is to overcome it by fixing molecules in place on a substrate or scaffold – although thermal disorder remains a problem. But perhaps it’s time to change the game, and to think instead of how to use molecules in ways that enable noise-resistant causal emergence. At least we know where to look for guidance.