Simple nanoscience is bringing the legendary Golden Fleece to life in the form of merino wool dyed with gold. Philip Ball links myth to modern science

Simple nanoscience is bringing the legendary Golden Fleece to life in the form of merino wool dyed with gold. Philip Ball links myth to modern science

Because myths are repositories for the deepest hopes, fears and obsessions of cultures, we shouldn’t be too surprised when real events seem to echo them. The parallels between the work of a team of chemists from New Zealand who have used gold nanoparticles to dye wool, as they discussed at a recent conference,1 and the legend of the Golden Fleece amount to far more than facile analogy. They both draw on the same cultural associations of gold, they are both steeped in the technology and symbolism of colour, and they probably both involve the same chemistry.

James Johnston and his colleagues from the Victoria University of Wellington have no illusions that their gold-coloured wool is going to be keeping us all warm and bright next winter. This, they admit, is expensive stuff: a scarf could cost $300-400. But they aim to turn this into a selling point. They say they are combining the finest Merino wool with ’the prestige and high value of gold using novel nanoscience and technology to provide a new suite of gold-wool products for use in high quality fashion apparel’. 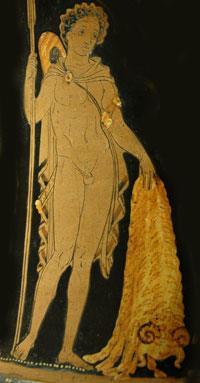 The basic idea is familiar enough: using the size-dependence of the optical properties of gold nanoparticles (in this case surface electron excitations called plasmons) to tune the colour across the visible spectrum. The tunable colours of these particles are already creating high-tech uses such as multicolour labels for tagging single molecules in molecular biology, and optoelectronic components for display devices. Given the costs involved, however, it is bold to think of using gold as a bulk colorant.

There is, however, nothing new in that. Visible light scattering from finely divided colloidal gold was exploited even in Roman times for colouring glass. The secret of dispersing gold this way was lost to the West after Rome’s decline, and wasn’t rediscovered until the late seventeenth century, when the German glassmaker Johann Kunckel figured how to fix purple solutions of colloidal gold into glass, turning it ruby red.

It’s significant that the gold solution was purple, because that has been a special colour to dyemakers ever since Tyrian purple acquired an aura of mystique and exclusivity in Imperial Rome. Ruby glass united this illustrious colour with a luxury material. But that association goes deeper still. The fleece that Jason sought in Colchis (in present-day Georgia on the Black Sea) may have derived from a sacred sheepskin that was dyed purple-black and worn by kings during a ceremonial sacrifice at the end of their reign.

So how did the fleece become golden? The myth of Jason seems closely linked to that of Hercules, who was one of the Argonauts. Jason’s quest for the fleece parallels Hercules’s task of taking golden apples from the Garden of the Hesperides, where they were - like the fleece - guarded by a dragon. But that’s not all. The Jason myth is an amalgam of tales, another of which relates to a raid on the Black Sea coast by pirates (later transmuted into the Argonauts) who went looking for alluvial gold that the Colchians extracted from river water. The Roman writer Strabo says that they did this by using animal skins as sieves. According to the Renaissance mining expert Agricola, ’since many particles of gold had clung to them when they were removed, the poets invented the ’golden fleece’.

Now you see where we are? Why would these gold particles have clung to the fibres of a fleece, making it glitter with the precious metal? For basically the same reason that the nanoparticles of Johnston and colleagues adhere to Merino wool. Wool is composed mostly of the protein keratin, which contains a high proportion (about one-sixth) of the amino acid cysteine. This compound has a thiol (-SH) side chain, and two such groups react to form disulfide bonds that crosslink the polypeptide strands, accounting for much of the strength of hair and wool. But sulfur also bonds readily with gold and silver, which will cleave cysteine disulfide bonds in order to attach. This happens in human hair, and people occupationally exposed to the metals often have relatively high concentrations of the metals in their hair. Exactly what happens in the case of the new nanogold colorants isn’t clear, as the details are proprietary; the researchers say only that ’the nanogold colorants are chemically bound to the sulfur of the wool proteins in the cuticle and the fibre’.

When William Perkin first began to market his epochal aniline mauve in the late 1850s, he called it ’Tyrian purple’ in an attempt to exploit the glorious associations with antiquity. It seems that Johnston and colleagues could with greater justification market their luxurious woollen thread as ’Jason’s Gold’.

With thanks to Rob Whetten for advice.

1 Innovations in textiles, organised by the Institute of Nanotechnology, 18-19 March 2009, Royal College of Physicians, London.