Superatoms reinforce the notion that chemistry is more about electrons than elements, says Philip Ball

Superatoms reinforce the notion that chemistry is more about electrons than elements, says Philip Ball

What if there is a second periodic table, or indeed an indefinitely large series of them? That notion has been floated in the context of ’superatoms’: clusters of atoms that are alleged to behave collectively as if they are large versions of atoms of quite different elements.1 For example, a cluster of 13 aluminium atoms seems to display some of the chemical behaviour of bromine and iodine, while six-atom clusters of aluminium were found in the mid-1980s to mimic the catalytic behaviour of ruthenium.

These discoveries have stimulated talk of designer materials built from superatoms - such as ionic crystals in which the regularly arrayed particles are ionic clusters such as the aluminium pseudo-halides. One speculation is that finely divided aluminium used in rocket fuel could be stabilised against oxidation by keeping it in the ’halide’ form before electrochemical conversion to plain old aluminium when it is ready to burn.

At root, analogies between superatoms and ordinary elements stem from a similarity in electronic structure. A simple model of small metal-atom clusters, in which free electrons move through a smeared-out ’jelly’ of metal ions, suggests that such clusters have, like single atoms, a shell-like electronic structure. If an electron shell is filled, the species is particularly stable, just like rare-gas atoms. It seems that certain ’magic’ clusters of aluminium atoms have this filled-shell structure when ionised - for example, Al13-, Al142+ and Al23-. 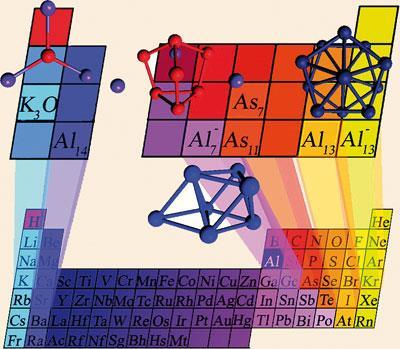 There’s no reason why this sort of behaviour should be confined to metal clusters. And of course a filled-shell picture is perfectly familiar for simple molecules, such as N2 and H2. But it doesn’t obviously make much sense to compare these molecules chemically to, say, xenon, just because they don’t have any unpaired electrons. To make a more meaningful comparison between small molecules and isoelectronic elements, we need to take a closer look at their electronic structures.

This is what Will Castleman and his coworkers, Samuel Peppernick and Dasitha Gunaratne, at Pennsylvania State University, US, have now done.2 They were intrigued by an old observation that tungsten carbide (WC) surfaces exhibit catalytic behaviour comparable to that of platinum: triggering water formation from hydrogen and oxygen, for example, and isomerising some saturated hydrocarbons.3

Platinum is isoelectronic with molecular WC in the sense that the four valence electrons by which platinum ([Xe] 4f14 5d9 6s1) exceeds the count for tungsten ([Xe] 4f14 5d4 6s2) can be considered to be made up by the four valence electrons of carbon. We can say the same thing of the diatomic titanium oxide TiO and nickel. In some sense, then, WC and TiO can be considered to ’evolve’ from Pt and Ni respectively, where the latter atoms represent the diatomic molecules with a bond length of zero. Castleman and colleagues wanted to try to follow that evolution using photoelectron spectroscopy, to study whether the details of the electron distribution match up.

They did their experiments on the anionic forms of these species: MX- and M-. They see several electronic transitions for TiO- and Ni-, and even at a cursory glance the photoelectron spectra look strikingly similar. To assign transitions to particular electronic states requires a calculation of the molecular orbitals of the diatomic molecules, but when this is done Castleman and colleagues find that the ’energy ladder’ and allowed electronic transitions of TiO- mimic those of Ni- very closely.

What’s more, the same holds for WC-/Pt- and for the isoelectronic pair ZrO-/Pd-. So the analogy is maintained both further down the periodic table and as the non-metallic element of the diatomic molecule is changed. This encourages the researchers to make a bold proposal: that the diatomic molecules ’possess superatomic electronic states, resulting from a transposition from the atomic limit of the respective isoelectronic elements into the molecular reference frame’. In other words, their similarity extends to a far deeper level than a mere correspondence in valence-electron count: the species look the same inside, you might say.

How far does this correlation hold? Castleman and colleagues wonder if, say, ScF-, VN- and CoH- will also be superatomic forms of isoelectronic Ni-, and if the correspondence continues as you add more atoms, so that (TiO)2 will mimic Ni2-. The deeper message, however, repeats chemistry’s familiar refrain, often rehearsed with reference to the contrast between elemental Na/Cl2 (yikes) and NaCl (yum): that chemistry is really not about elements at all, but electrons.