One of the surprising book successes of last year, for me, was Perfumes: The Guide  (Chemistry World, December 2008, p58) by Luca Turin and Tania Sanchez. I never realised that so many people would revel in the book’s rarefied, sometimes surreal descriptions of expensive ways to anoint themselves with smelly potions. There is no unpretentious way of writing about smell, according to writer John Lanchester, but Turin and Sanchez’s claim that Dior’s ’Dune’ has an odour that recalls the pink colour and shiny texture of artificial limbs (a good thing, apparently) manages to be simultaneously both curiously compelling and perhaps one of the least meaningful statements I shall ever read.

Turin, however, has form. His earlier book The Secret of Scent  delights in finding a language for scent, with tasting notes as impressive as the vocabulary of the expert oenophile: ’Halfway between a rose and a violet, but without a trace of the sweetness of either, set instead against an austere, almost saintly background of cigar-box cedar notes’ describes Japanese perfume ’Nombre Noir’. 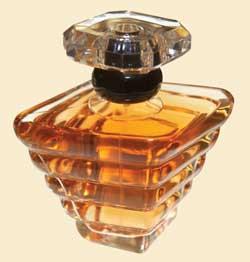 Yet this earlier book (unlike Perfumes) is popular science, and his descriptions of familiar chemical reagents (nitrobenzene: ’a mixture of amaretto and shoe polish’) will ring bells with many Chemistry World  readers. As he points out, no two molecules with different structures have ever been found to smell identical: the ’almond’ smell above is easily distinguished from the ’almond’ of benzaldehyde and hydrogen cyanide.

These distinctions are perhaps most famous for enantiomers, of which the most celebrated example is carvone: R  -(-)carvone is minty, S  -(+)carvone smells of caraway (and is the main constituent of caraway oil). But why this difference? The conventional view is that this has something to do with the shapes of the olfactory receptor proteins, which may have chiral binding sites that can ’feel’ differences between enantiomers: like trying to put a left or right hand into a right-handed glove. Yet there is not a unique receptor for every smell - it seems that olfaction employs some kind of combinatorial code based on a large but limited number of receptors. And the simplistic notion of a shape-controlled ’lock and key’ principle for smell doesn’t stack up: some odorants with similar shapes smell very different, while others with very different shapes smell similar (both decaborane and hydrogen sulfide evoke rotten eggs).

Turin himself became notorious for his radical theory,1 expounded in The Secret of Scent  , that the molecular mechanism of olfactory transduction is based not on shape but on the receptor’s ability to ’probe’ the substrate’s vibrational frequencies via electron tunnelling. This idea has been rubbished by much of the biological and neuroscience community2 - but Marshall Stoneham of University College London and colleagues have shown that the basic tunneling mechanism is not implausible.3

Now Stoneham, working with Jennifer Brookes and Andrew Horsfield, has found a molecular property that rather reliably distinguishes enantiomers that smell the same from those that smell different.4 In a survey of more than 500 different chiral odorants, 59 per cent are of the former type and 41 per cent of the latter, although only 5 per cent of enantiomeric pairs seem truly identical both in smell and intensity. Fully 52 per cent of all the molecules in the survey contain six-membered rings. Brookes realised that all pairs that seem to smell truly alike have rigid rings, while those that smell unequivocally different have flexible ones. This is the opposite of what one might intuitively expect, since flexibility might be expected to smear out the shape differences between enantiomers.

Brookes and colleagues say that their findings challenge both the shape-based model of olfaction and Turin’s ’spectroscopic’ model. The researchers say that their results might be understood if actuation involves rare molecular conformations accessed via fluctuations, which flexible molecules can more easily adopt. But the details are far from clear, and may remain so until high-resolution crystallographic structures of olfactory receptor proteins become available.

Brookes’ team suspect that something similar might apply to the transduction process of steroid hormones - a theory that entails grappling with one of chemistry’s biggest challenges: making dynamics an aspect of molecular design.