Zinc nanoparticles appear to have the ability to make odorants smell stronger and could a give a valuable insight into how olfaction works, says Philip Ball

Zinc nanoparticles appear to have the ability to make odorants smell stronger and could a give a valuable insight into how olfaction works, says Philip Ball

Applications of nanoparticles in the cosmetics industry have been well advertised, not least because of concerns about their possible toxicity. But it’s not often that you hear them discussed in the context of perfumery.

True, some researchers have wondered whether nanoparticles might deliver perfumes in much the same way as they have been investigated for drug delivery, with the active molecules either bound to the particle surfaces or held inside degradable nanocapsules.1 But Vitaly Vodyanoy and his colleagues at Auburn University in Alabama, US, have found evidence that nanoparticles might do something far more interesting for perfumes. 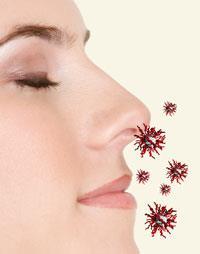 They have found that zinc metal nanoparticles can make odorants smell stronger.2  It’s a truly peculiar result and might offer insights into the way olfaction works.

The researchers measured the response of rat sensory neurons in a slice of olfactory epithelium by electrical means. The tissue samples were exposed to various smelly compounds: ethyl butyrate, which has the fruity smell of bananas and pineapples; the enantiomers of carvone, which smell of spearmint and caraway; and eugenol, which smells of cloves. The odorants were sometimes delivered pure, and sometimes mixed with zinc nanoparticles 1-2nm across, containing 40-300 zinc atoms.

The odorants all provoked signals from the neurons that increased in magnitude with increasing odorant concentration until saturating. But with nanoparticles present, the signal was boosted by up to 250 per cent. So far, the effect seems to be specific to zinc nanoparticles: it isn’t found for copper, gold or silver particles of the same size, nor for solutions of zinc ions (in fact, zinc ions somewhat reduce the olfactory response).

Vodyanoy and colleagues had a specific reason to think that zinc might affect the transduction of olfaction. For one thing, zinc de?ciency is known to cause anosmia - the inability to perceive smell. And odorant receptor proteins have several zinc-binding sites. The response of olfactory neurons is triggered when odorant molecules bind to these receptors in the hair-like protrusions of the neuronal cells called cilia. This binding activates another protein attached to the inner surface of the cell membrane, called a G-protein. G-proteins are involved in several signal-transduction processes of cells. But it is not yet clear precisely how the olfactory receptor protein interacts with the G-protein, nor how the binding of an odorant induces new behaviour in the receptor itself.

One theory for the latter step was put forward in 1996 by the physiologist Luca Turin.3 He suggests that the receptor senses the vibrations of the odorant, because these vibrations assist the quantum-mechanical tunnelling of electrons between parts of the receptor. It’s a controversial notion - nothing like it has been found elsewhere in biochemistry - and some olfactory researchers dismiss it.4 But the basic physics seems plausible.5 Vodyanoy and colleagues interpreted Turin’s proposal as implying that zinc ions might assist the transfer of a signal between the receptor and G-protein. So when in 2005 they isolated very small metal nanoparticles in the blood of humans and other vertebrates,6 they wondered if these might serve such a role in signal transduction. Their new results have led them to propose that the nanoparticles bridge the receptor and G-protein.

Curiously, Turin doesn’t agree. He suggests that the zinc nanoparticles might bind to the top surface of the receptor, not between it and the G-protein. Here, says Turin, the particle could act as a kind of mini-battery to drive the primary odorant-sensing event. Some zinc atoms could dissolve as zinc ions, in the process losing their electrons, which are then conducted through the metallic particle and donated for the tunnelling process with which he thinks transduction begins. Noble metals won’t work in the same way because their reduction potentials are too large. Turin believes there are ways to test these ideas.

Either way, the fact that zinc nanoparticles seem to be present in blood suggests that this might not be a purely artificial effect but one that happens naturally too. Demonstrating that will require, as a first step, showing that natural zinc nanoparticles are present in neuronal cilia under normal physiological conditions. The question remains whether adding more nanoparticles can enhance olfaction beyond its normal level. And perhaps the most direct way to test that will be to take a sniff.