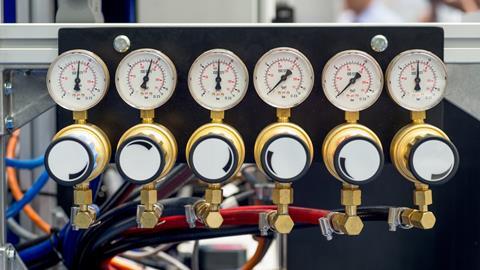 Not such a gas

There are three phases of matter, but it’s rare that we think about gases participating in process chemistry. Most of the products that we sell in industry are solids or liquids. Our colleagues in the commercial gases industry will likely note that they too contribute to the chemical enterprise. There would be neither party balloons nor MRIs without pure and plentiful liquid helium, extracted from natural gas deposits. Not to mention the nitrogen, oxygen and argon distilled from liquid air. But what about the gases that form during large-scale chemical reactions?

It’s one of the first reactions that you learn in organic chemistry, but it seems that few people actually get to run a diazonium salt formation reaction. The order of addition may be slightly different, but I have seen these reactions run in the laboratory and on 1000 litre scale. The reaction is the same – an amine is dissolved in an acid solution, while sodium nitrite is prepared in another vessel. It can be a surprise to see the colourless sodium nitrite solution turn brown while being added to the acid – that’s NO2 forming on the way to making the nitrous acid. What’s even more amazing is the transformation of an aromatic amine into a diazonium salt: two nitrogen atoms, trapped like a coiled spring, ready to leave as fizzing nitrogen gas when a nucleophile such as iodide is added.

Not all reactions of diazonium salts release that gas, however. Carbon nucleophiles will react with the diazonium group itself, creating diazo compounds. These are often strongly coloured (and have generated a whole family of synthetic dyestuffs). It’s one of those classic moments of chemistry where you can peer into a murky reactor and see a burst of bright yellow arise out of a brown reaction.

In other cases, the gases are trapped inside a reagent. Phosgene, with its carbonyl centre and two flanking chlorines, is an incredibly synthetically useful gas. But it’s also a wildly toxic chemical warfare agent. Rather than suiting up in full hazmat gear, chemists use carbonyldiimidazole (CDI), which does much the same coupling reactions as phosgene without the chemical pneumonia. The reactions are quick and efficient – but each molecule of CDI consumed generates a molecule of carbon dioxide, which needs to be managed.

In early versions of a particular coupling reaction between an acid and an alcohol in the plant, we would perform a reaction check to make sure that there was sufficient CDI in the mixture, and that it hadn’t been destroyed by some stray moisture in the reactor. One day, the reaction called for additional CDI. However, I forgot to remind the operators to vent the reactor to allow the additional carbon dioxide to escape. I was fortunate and grateful that the operator was experienced and knew about the additional potential for gas, and he noted after my panicked phone call that the pressure increase was negligible.

Oxygen is a tricky gas, and almost always something to worry about in a reactor. The fire triangle is simple: fuel, oxygen, heat. It’s difficult to control heat sources, and the reality of chemistry is that whatever we are working with (especially solvent) falls under the definition of ‘fuel’. Because of this, we’re always trying to keep oxygen out. There are various options: simply purging with nitrogen gas (or argon if you don’t mind the extra cost) and maintaining a positive pressure; or for more sensitive cases, applying a vacuum hard enough and long enough to degas the solution, then relieving the vacuum with nitrogen. Doing this two or three times can make sure that there’s very little oxygen left in the reactor – much less than needed to cause a fire.

But what happens when the oxygen comes along with the reagent? There aren’t very many reagents for which this is the case, but hydrogen peroxide (the 35% variety) is a very useful oxidant. When combined with hydrobromic acid, for example, it can help generate elemental bromine. It can also decompose under certain conditions to form oxygen. We routinely ran a process where the mixture was particularly thick, and because of that, we were having difficulty stirring in the peroxide. A thick crust of product would form, leading the peroxide to puddle on top of the crust and decompose, releasing oxygen. We didn’t realise until someone noticed that the oxygen monitor began showing double digit numbers. Fortunately, turning up the nitrogen flow was sufficient to sort the problem… another gas to the rescue!