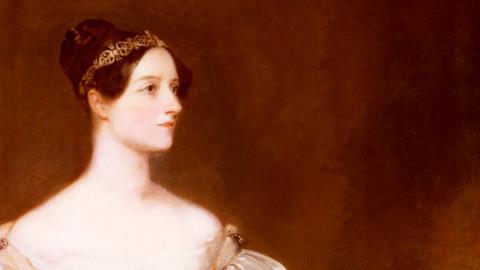 Lovelace had an amazing life, but is that enough to appear on a banknote?

The call from the Bank of England for members of the public to nominate a scientist to put on the new £50 note offers an opportunity to rebalance the gender disparity so far. We’ve had Michael Faraday, Isaac Newton, Charles Darwin, Christopher Wren, Lord Kelvin (in Scotland), George Stephenson, and Matthew Boulton and James Watt (together on the current note). Florence Nightingale – a pioneer of epidemiological statistics as well as nursing – is the lone female representative. So far, a popular choice has been Ada Lovelace, who worked with Charles Babbage on the steampunk computer the Analytical Engine.

Sadly, Lovelace’s contributions are routinely exaggerated – some imply she single-handedly invented computing. (A much better choice would be Dorothy Hodgkin, who won the 1964 Nobel prize in chemistry for her work on the crystallography of complex biomolecules and proteins.) And it seems a shame to shoehorn Lovelace into the role of scientist, since her exploits were varied and colourful. In some ways, she compares with Mary Shelley – both neglected daughters whose innate brilliance brought them a degree of fame and notoriety. Lovelace’s indifferent father was none other than that arch-cad Lord Byron, at whose suggestion in 1816 Shelley conceived of Frankenstein.

But Lovelace was destined to meet a real-life Victor Frankenstein, who claimed to use electricity to create life.

His name was Andrew Crosse, a gentleman of leisure who lived close to Lovelace in Somerset. Using the newly invented voltaic pile that enabled Humphry Davy and Michael Faraday to pioneer electrochemistry, Crosse investigated the ‘electrical crystallization’ of minerals in his home laboratory. He dripped a solution of potassium silicate and hydrochloric acid onto a lump of iron oxide ore connected to the pile, and reported whitish growths on the surface of the stone. Perhaps these were akin to the ‘chemical gardens’ known to form in silicate solution: complex tubular structures made from inorganic semi-permeable membranes. These have been proposed as models of structures formed at hydrothermal vents that could have supported transmembrane potentials to drive the origin of life.1

But what Crosse described was much more than a crude analogue for the de novo formation of life. ‘On the 26th day,’ he wrote, ‘each figure assumed the form of a perfect insect, standing erect on a few bristles which formed the tail. It was not until the 28th day, when I plainly perceived these little creatures move their legs, that I felt any surprise.’

Insects appearing from an ‘electrified stone’ does seem rather surprising, even by 19th century standards. Crosse’s experiments were described in The Times in 1836, prompting much debate at the British Association meeting that year. A rumour began that Faraday had replicated the findings, which he was obliged to deny. ‘With regard to Mr Crosse’s insects,’ he wrote to his friend, the German chemist Christian Friedrich Schönbein, ‘I do not think anybody believes in them here except perhaps himself and the mass of wonder-lovers.’ There were always plenty of those.

Lovelace wasn’t obviously one of them, but she was curious about Crosse. Prescribed a course of mathematics to cure her of her rebellious youthful passions, she wanted to blend abstract mathematics with the world of the imagination. This led to her fruitful correspondence with Babbage, but also to dabblings in exotic ideas like mesmerism, or ‘animal magnetism’ as it was sometimes called. She became interested in the electromagnetic fluxes of the body, which led her to correspond with Faraday.

It’s easy to see, then, what attracted her to Crosse in the Quantock Hills. There are suggestions that Crosse had even inspired Mary Shelley’s Victor Frankenstein, after she attended a lecture of his in London. Lovelace described him as the archetypal disheveled mad scientist, but all the same was drawn into this peculiar electrophysiology, and in 1844 she wrote to Crosse saying that ‘I am more than ever now the bride of science.’

Lovelace differs from Mary Shelley in that she never reined in her wild youth. After absconding from her father’s home with the (married) poet Percy Shelley at the age of 16 and outraging public opinion with Frankenstein, Shelley settled into a more conservative lifestyle in later years. But Lovelace remained the hedonist, experimenting with drugs like opium and cannabis.

And at Crosse’s household she met and fell in love with his son John. They were both already married, but they embarked on an extravagant affair. John introduced her to gambling on the horses, where she thought her mathematical skill would be useful. It wasn’t – she ran up huge debts, had to pawn her diamonds and confessed everything to her husband Lord Lovelace shortly before her death in 1852, aged just 36.

If Lovelace gets onto the £50 note after all (the decision, after the Boaty McBoatface farrago in 2016, is not being left entirely to public opinion), I’ll tell myself it’s for her spirit, not her ‘science’. Spurned by a father in an age of stifling patriarchy, she blazed her own trail and defied expectations. There’s plenty to celebrate in that.