Nobel’s name was made in explosives, but what about the chemistry behind them?

As a chemistry student, I learnt many half-truths. One of them was that gunpowder is a ‘low explosive’ because it is a mixture: when its potassium nitrate decomposes, the released oxygen has to diffuse to the charcoal or sulfur in which it burns. Accordingly, gunpowder explodes at only a few metres a second. By contrast, a ‘high explosive’ like trinitrotoluene (TNT), has oxygen as part of the single, explosive molecule. TNT explodes by a fast monomolecular reaction, and its speed of ignition is several kilometres a second.

If only life were so simple. Much later, I learnt that the Simplon tunnel, which connects Switzerland to Italy, was largely blasted by a supposedly ‘low explosive’ mixture: sticks of charcoal soaked in liquid oxygen. It is, of course, safer and more convenient not to transport explosives around, but to make them on site. Furthermore, if the detonator failed to fire the charge, the workers merely had to wait for the liquefied gas to evaporate. They could then remove the harmless charcoal stick and try again.

Later still, I discovered that much quarrying is also conducted using a mixture: in this case ammonium nitrate plus fuel oil. Clever additives have been invented for the fuel oil so that when you add ammonium nitrate to it, the result is a gel. Squirt the mixture into a borehole, and nothing runs out.

So much for mixtures being less explosive – I now know much less about explosives than I did as a student. When the news began to mention ‘plastic explosives’, I imagined lots of possible polymeric explosives. A nitrogen-containing analogue of PVC, for example, such as the nitro compound PV(NO2) or the nitrate PV(NO3). I have never heard of either of them. During the second world war, the British gave plastic explosive to many partisans. The actual explosive was not a single polymer but a mixture: the military explosive cyclonite as tiny crystals, mixed with enough plasticiser to make it flow. 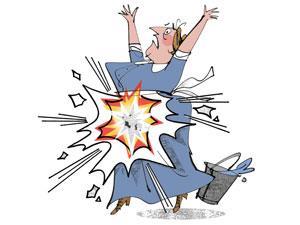 Indeed, the only polymeric explosive I know is guncotton, or nitrocellulose. The story goes that Christian Schönbein discovered how to manufacture the explosive by accident. He was experimenting with nitric and sulfuric acids in his kitchen, and spilled them. Guiltily, he wiped up the mess with his wife’s cotton apron, washed it out with water and wrung it fairly dry. Be sure your sins will find you out! His was revealed later, when the apron exploded. Schönbein later tried to make guncotton commercially, but he had many accidents and finally gave up. The stuff deteriorated rapidly and dangerously. Much later, Frederick Abel showed that the cellulose fibre was hollow. Even after copious washing, it retained some acid. To make guncotton safe, you had to be very forceful with it while still wet, so as to break the fibres open.

So, as Schönbein found out, polymeric explosives can be tricky. Indeed, many commercial explosives are both monomers and mixtures. The great Alfred Nobel took years to pacify nitroglycerine after his younger brother and several other workers were killed in a nitroglycerine explosion in one of his factories.

Ultimately, Nobel devised a clever mixture that got around bans on liquid nitroglycerine. Instead he used the diatomaceous silica earth kieselguhr to absorb the nitroglycerine. The result was the stabler form, dynamite, for which Nobel was most famously known until his eponymous prizes. (Incidentally, I wonder if other dangerously explosive liquids such as nitrogen trichloride could also be stabilised by absorbing them in kieselguhr?)

Later, Nobel found another mixture: nitroglycerine containing an added 7% or so of cellulose dinitrate or pyroxylin. This made ‘blasting gelatine’, an even more powerful high explosive and perhaps the first plastic explosive.

Weirdly, by mixing nitroglycerine with about 60% of nitrocellulose, and making it into a gel with acetone, you get an amazingly low explosive. When the acetone evaporates, you get the military propellant cordite. My bafflement is complete.