At the opening ceremony of the International Year of Crystallography (IYCr) in January, Jenny Glusker of the Fox Chase Cancer Center in Philadelphia, US, delivered a talk on the past, present and future of crystallography. Her talk described the traditions of the field – traditions that Glusker herself personifies. For Glusker worked in the laboratory of Dorothy Hodgkin, who was a PhD student of Desmond Bernal, who was a protégé of William Bragg – who of course started it all, after Max von Laue’s seminal discovery of x-ray diffraction in 1912. 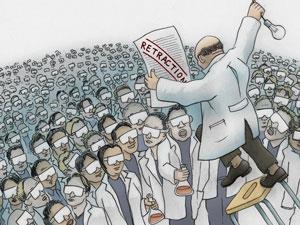 This sort of scientific genealogy is properly a source of pride to those concerned, but it is more than that. A scientist acquires from her mentor not just a technical training but a culture – a sense of what matters, in terms of the questions one asks, approaches to answering them and the attitude one adopts in researching them. It is hard, for example, to imagine anyone emerging from under the wing of Bernal with much regard for rigid disciplinary boundaries. A part of that culture is surely also a sense of moral and ethical responsibilities.

This is one reason why Alexander Petersen of the IMT Institute for Advanced Studies Lucca in Italy and colleagues from the University of Houston in the US suggest in a preprint that the trend towards large research teams may be creating problems. That trend has been much discussed, one implication being that the old mechanisms of rewarding scientific achievement – individual prizes, not least the Nobels – are becoming obsolete. Petersen and colleagues confirm, with a number of metrics, that the number of coauthors on papers is rising across the sciences, and that singleton Nobel prizes are now rather rare.

This poses challenges for attribution of credit (at the same time that such credit is becoming more vital to young researchers), not to mention the difficulty of simply organising large teams so that they work efficiently. But the trend also has wider implications for the whole scientific community, and indeed beyond.

As teams get larger, they become less transparent. It is harder to monitor who is doing what, and becomes increasingly necessary to take each contribution on trust. Petersen and colleagues suggest that this could make it easier for misconduct to go unnoticed, and less likely that there will be channels of mentorship to discourage it in the first place. Some highly respected scientists have had their reputations tarnished, whether fairly or not, by their apparent failure to adequately scrutinise results that turned out to be falsified by junior colleagues: biologist David Baltimore in the case of Thereza Imanishi-Kari in the late 1980s, and physicist Bertram Batlogg in the case of nanotech fraudster Jan-Hendrik Schön in the early 2000s. Both senior figures were busy people in big labs. Such situations have surely got even harder to manage since then. Poor management procedures apparently allowed young forensic chemist Annie Dookhan to falsify perhaps thousands of drug-test results in the Hinton laboratory in Massachusetts, leading to Dookhan’s prison sentence late last year.

These cases may be extreme, but Petersen and colleagues suggest that it is difficult to maintain chains of responsibility and good conduct in large teams. When things go wrong, it might be all but impossible to trace the blame. Big teams also increase the potential for conflicts of interest – say with researchers peer-reviewing a collaborator’s manuscript – at the same time as making them harder to spot. ‘In this respect, we have been witnessing the emergence of a conflict between the scientist and the scientific commons,’ Petersen and colleagues write.

Some of these concerns relate to a sense of values. ‘Many young scientists have likely been “lured” into postdoctoral traps within large projects,’ Petersen and colleagues continue. ‘Are the next crop of scientists trained to be leaders or to just fit into a large production line? And once they enter the tenure track, do the lessons they observed reflect positive scientific values? Or do they reflect a system engaged in productivity at the expense of quality … and pathologically competitive attitudes that run counter to socially beneficial progress?’

Such attitudes may be forced onto young researchers by the prevailing culture. At the IYCr opening ceremony, a panel of young crystallographers debated the challenges they and their peers face, and produced a signed declaration from their discussion. It says: ‘Young researchers face problems with long working hours, high pressure and expectations to obtain results and to publish papers quickly and in top journals, job insecurity, and large teaching commitments. These pressures are intensifying, and … they hinder the freedom to explore original and innovative directions or to think about long-term research goals.’ They can also motivate misconduct: Dookhan admitted, for example, that she faked results because of ‘her desire to be seen as particularly hard working and productive’.

Large teams and increasing competition might be an inevitable trend, but their consequences for mentorship and ethics need to be faced.