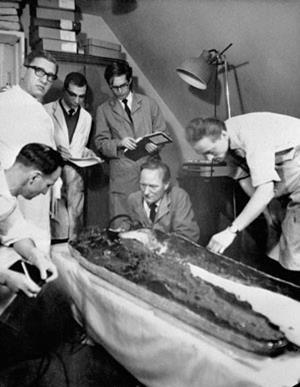 The lead coffin of Anne Mowbray, Duchess of York, being opened by experts at the London Museum.

The central research laboratories of the Cookson Group are celebrating their 50th anniversary of operation at their site at Perivale, Middlesex. Originally set up in 1933 as the research labs of Goodlass Wall & Lead Industries – specialists in lead and antimony products – the labs now provide a comprehensive service to the 50 or so Cookson Group subsidiaries in the UK and overseas.

The current interests of the group include the refining of lead, anti-corrosive and fire-retardant paint, lead-clad steel, printing metals, diecasting in aluminium, magnesium and zinc, ceramic pigments, zircon and antimony. The labs at Perivale provide a comprehensive analytical service for the Group, in addition to research into new lead-based products and diversification into plastics.

One interesting piece of research carried out in the labs was an investigation a few years ago into the chemistry and metallurgy of the lead in the coffin of Anne Mowbray, Duchess of York, who died in 1481 at the age of nine.

Ed. On 1 November 2012, after poor share performance, the Cookson Group announced a demerger into two separate companies. Cookson’s performance materials division became a new speciality chemicals company called Alent. The remainder of the business, consisting principally of the engineered ceramics and precious metal processing divisions, was renamed Vesuvius and the name Cookson is no longer used.