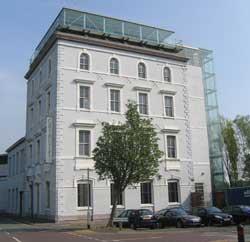 Catalyst, the first museum devoted entirely to the history of the chemical industry, recently announced its plans and details of major building development at its Widnes site.

Catalyst began life as the Halton Chemical Industry Museum, a temporary exhibition mounted in 1982, largely as a result of local industry concern that there was no official museum of the chemical industry, as there was for the glass industry, the dye industry etc.

The museum will occupy the Gossage Building close to the river Mersey - a listed building that once housed William Gossage & Son, at one time the largest soap manufacturer in the world.

The basic structure of this building, also known at the Tower Building, has already been augmented with an observation gallery and an external, all-glass lift [designed by Brock Carmichael Associates]. So far the building has cost ?1m, with funding from the EEC, government and local authority. The second phase of building will include caf? and conference facilities as well as the galleries that will be Catalyst’s main attraction to visitors.

Catalyst is to be mainly devoted to the presentation of exhibitions, although small collections of historic artefacts will be maintained.