Flying: heavier or lighter than air?

Hydrogen balloons have fallen out of favour, except in chemistry demonstrations

In 1783 the Montgolfier brothers, Joseph-Michel and Jacques-Étienne, devised the first hot-air balloon, using the expansion of hot air to create lift. The Montgolfiers’ first flight was near Annoney in France and so when a garbled account of his achievement reached Paris, Professor Jacques Charles decided that the Montgolfiers must have been using hydrogen (which is much less dense than air). 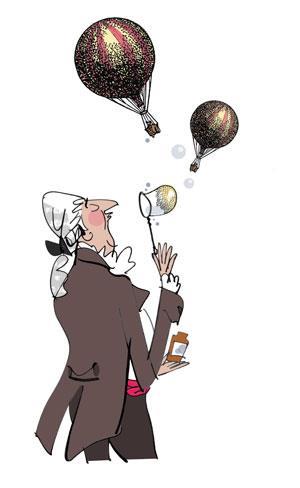 Charles and his co-workers constructed a hydrogen balloon of silk fabric, and to make it less permeable to gas they coated it with a solution of rubber in turpentine. Their monster had a volume of about 35m3. To fill it with hydrogen Charles and his team added half a tonne of scrap iron to a quarter of a tonne of suitably-diluted sulfuric acid and piped the resulting reaction-heated hydrogen into the balloon with lead pipes. Quite the chemistry experiment!

It took days to fill the balloon and there were many leaks. But ultimately the balloon rose nobly into the air, and went northwards with the prevailing wind. It hit the ground again about 21km north of Paris, where it was destroyed by terrified peasants with pitchforks. Only later did Charles find out that the Montgolfier balloon used hot air – he had invented the hydrogen balloon by mistake.

Hydrogen went on to be the great lifting gas for Zeppelins and dirigibles generally. But, in the 1930s, two huge hydrogen fires in airships (one in the Hindenburg, and one in the R101) turned aerial technology decisively towards heavier-than-air winged machines. Even small balloons these days use helium, which is much more expensive and not as good a lifter, being twice as dense. But it is, at any rate, non-flammable.

Even so, in a chemical lecture it is feasible to make hydrogen by dissolving iron nails or (faster) granulated zinc in a mineral acid, and piping the evolved gas into a rubber balloon. Perhaps the fastest way to make hydrogen for a chemical lecture is not to use acid at all, but to dissolve aluminium foil in sodium hydroxide solution: 2NaOH + 2H2O + 2Al ? 2NaAlO2 + 3H2. This energetic reaction will inflate a rubber balloon in a few minutes, and the result will lift weights or otherwise zoom dramatically up to the ceiling.

Hydrogen reacts intriguingly with chlorine, the mixture exploding in ultraviolet light to form hydrogen chloride: H2 + Cl2 ? 2HCl. I claim that this is the fastest possible chemical reaction, and goes at the speed of light. I have demonstrated it in lectures and on TV.

But I didn’t get my gases from cylinders; I made them in situ by electrolysis of hydrochloric acid solution. I could fill a little polythene bag with this gas mixture, and tell the audience of its great instability. ‘It does not quite explode if you look at it,’ I’d say. ‘But it explodes if you take a photograph of it!’ Remarkably, the bag did not explode under steady lecture or TV tungsten-filament lamps. But the sudden burst of ultraviolet light from a photographic flash-unit set it off at once.

I once read a lovely old story about this reaction. The goodie had captured the baddie at night, and tied him to a balloon containing hydrogen and chlorine. The goodie then released the balloon, which drifted up into the night sky. With the light of dawn, the balloon exploded and the baddie fell to his well-deserved end. Sadly, this would not work. A mixture of 50% hydrogen and 50% chlorine is too dense to lift a balloon. 90% hydrogen and 10% chlorine would be a better lifter; but may not be sufficiently light-sensitive. Does any reader know the story or a solution?