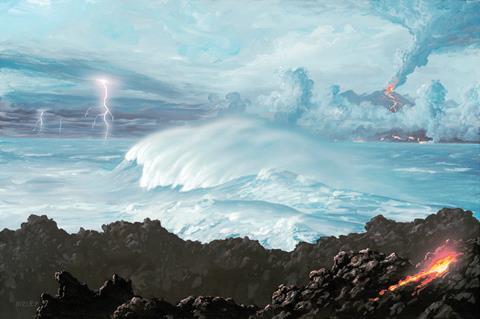 Around 4.36 billion years ago, conditions on the early Earth might have been right for RNA to form

‘It is mere rubbish thinking, at present, of origin of life’, Charles Darwin famously wrote in 1863 to his friend Joseph Hooker. Equally memorably, a mere eight years later he could not refrain from doing so anyway, writing to Hooker again that if there had been ‘some warm little pond with all sort of ammonia and phosphoric salts,—light, heat, electricity present’, then it was possible that ‘a protein compound was chemically formed, ready to undergo still more complex changes’ – leading to the first life-forms.

Darwin’s notion of a prebiotic soup seasoned with the right chemical ingredients was later developed in speculations by Alexander Oparin and J B S Haldane, and then tested experimentally in the ground-breaking experiments of Stanley Miller and Harold Urey in 1952. These produced simple amino acids from a mixture of methane, ammonia, hydrogen and water energised with electrical discharges. But while countless lab studies of plausible prebiotic chemistry have been conducted since, the tale has only grown ever more complicated as we come to understand more about the actual geochemical and geological conditions on the early Earth.

It was common in Darwin’s day to consider ‘protein’ as a kind of Ur-substance of living matter. But today there is a popular view that RNA, which is capable both of enzyme-like catalysis and of holding gene-like information that can be copied and inherited, might have been the precursor to living systems based on the DNA–protein double act. What kind of prebiotic chemistry might have spawned this ‘RNA world’? It is, after all, a complex molecule to make – memorably described by Gerald Joyce and Leslie Orgel, two key advocates of the RNA world hypothesis, as ‘a prebiotic chemist’s nightmare’.1

Steven Benner of the Foundation for Applied Molecular Evolution in Alachua, Florida, has pursued that question for more than a decade. In 2012, for example, he and his colleagues suggested how RNA nucleotides and oligomers might be formed from simple precursors in the aquifers of ancient mountain valleys, stabilised by borate minerals.2 Two years ago Benner and others outlined a detailed scenario for how these same molecules might have appeared during the Hadean era of Earth’s evolution, around 4.36 billion years ago.3 They explained that making RNA nucleotides in the likely CO2/N2/H2O atmosphere of the prebiotic Earth (a more oxidising composition than in the original Urey-Miller hypothesis) is rendered hard because it requires reduced nitrogen compounds such as ammonia, hydrogen cyanide and cyanogen that won’t obviously be formed in such an environment.

But a brief window of opportunity might have been opened by the putative glancing collision with the Earth of a moon-sized object called Moneta 4.48 billion years ago.4 This could have temporarily created a sufficiently reducing atmosphere to stabilise such RNA precursors, allowing them to precipitate and initiate mineral-catalysed RNA formation on exposed land areas – until an unproductive milieu was re-established by around 4.3 billion years ago. In this view, the appearance of an RNA world would have been an extremely fine-tuned and contingent event.

Now Benner and coworkers have found more experimental support for this hypothesis: that ribonucleoside triphosphate monomers can be polymerised into RNA via surface catalysis when they percolate through glassy basaltic rocks likely to have been present on Earth at that time.5 In other words, if the monomers were available, it seems very likely that the polymers would form too. Borates, present in these basalts, have also been shown to guide the formation of the ribose sugar of RNA from simple carbohydrates.

We have come far from the prebiotic soup of Darwin and Urey and Miller. It’s not enough now to haphazardly generate a few promising-looking organics from a vaguely ‘prebiotic’ chemical mélange: a route to the chemical origins of life needs to be tightly tied to the fine details of early Earth history.6 This demands truly interdisciplinary effort, and it makes any hypothesis ever more dependent on the specifics of the environment in which it operates: a consideration as relevant to astrobiology as it is to the origin of terrestrial life.

But given how limited our knowledge will surely always be of events and conditions four and a half billion years ago, how confident can we ever be about such fine-grained theories for how life arose? Making some of the molecules life now uses is only a part (perhaps a small part) of the story. Should we instead be seeking more generalised theories of how chemical systems become biological entities?

Put this way, the tension is just the same as that which pertains to understanding living systems themselves. Will the answers come by drilling down into the (bio)chemical specifics, or do they lie with generic processes characteristic of biotic matter? The solution may require both approaches; the harder question is whether the twain shall ever meet.