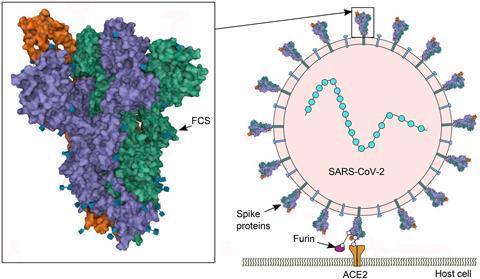 The dinner-party bores who once proclaimed so confidently on hanging chads (in 2000) and subprime mortgages (2008) now have a new way to announce their perspicacity: ‘Ah, but what about the furin cleavage site? A smoking gun, if you ask me.’

It would be as if the chatterati had suddenly become obsessed with the finer points of aromatic substitution or heterogeneous catalysis. I admit that I would previously have supposed furin to be some derivative of the furan molecule, whereas in fact it is an enzyme with the recondite job of converting as-synthesised proteins to their active form – a job conducted by cleaving bits off the precursor proteins.

This is, of course, all about Covid – specifically, about the site snipped by furin (or related protease enzymes) in the spike protein of the Sars-CoV-2 coronavirus. This transformation enables the spike protein to bind to the ACE2 receptor of human cells, initiating viral attachment and infection.

It has been known for about a year now that this step is central to the way the virus attacks.1–3 But what has brought that biochemical reaction crashing into the public consciousness is the suggestion that there is something about this furin cleavage site (FCS) that looks fishy – or rather, that doesn’t look sufficiently batty. The initial view was that the pandemic’s pathogen is a natural virus that jumped from bats to humans in China, perhaps via the meat markets of Wuhan. But some now suggest that the odd FCS of Sars-CoV-2 was developed in a lab – most probably, in the Wuhan Institute of Virology. The American biologist David Baltimore, who won the 1975 Nobel prize for his work on the virology of cancer, set the cat among the pigeons by saying to New York Times reporter Nicholas Wade that the coronavirus’s FCS is a ‘smoking gun’ for its lab origin.

This lab leak hypothesis suggests that the virus might either have been an innocent but risky experiment that went wrong, or a virus deliberately tailored to infect and kill humans. Either way, such gain-of-function experiments, which give viruses new, engineered capabilities, are known to be pursued in many countries. What makes the lab leak hypothesis all the more incendiary is that some gain-of-function studies in Wuhan seem to have been funded partly in collaboration with researchers in the US – making the idea potentially embarrassing both for China and its global economic rival.

If that weren’t bad enough, the lab-leak theory was initially pushed by the Trump administration early in the pandemic, without any credible evidence, as an attempt to deflect attention by whipping up xenophobic anti-Chinese sentiment. It probably contributed to provoking anti-Asian abuse and attacks, tarnishing the idea as a racist conspiracy theory. Chris Ford, former Assistant Secretary of State for International Security, has implied that Trump’s State Department wasn’t so much investigating the argument that Sars-CoV-2 was a Chinese bioweapon that escaped, as actively constructing that case.

This partly explains why the resurgence of the lab-leak theory has become thoroughly poisonous – although it is one of the few divisive controversies of the pandemic that has not split cleanly along politically partisan lines. Lab-leak proponents accuse both China and some in the US of wanting to suppress any serious inquiry, either through self-interest or out of political correctness; their antagonists continue to see the idea as fundamentally racist and lacking any hard evidence.

What’s the big deal about the FCS? Such a feature is found in other coronaviruses isolated from the wild4 – but not, it seems, in any for which there is more than a 40% sequence match with the Sars-CoV-2 spike protein.5 It has other unusual structural features, and moreover modification of the FCS is a common locus of gain-of-function experiments.6,7 But who are we to say what evolution might produce? Isn’t this an argument from incredulity, like the intelligent design view that the eye or the flagellar motor seem unlikely products of natural selection?

Baltimore has now retracted his ‘smoking gun’ comment, saying only that he didn’t yet discount the lab-leak theory.8 Nor does US President Joe Biden – and neither can we. An honest appraisal must recognise, however, that there is no direct evidence for it either. We might never know the truth with any certainty, especially given China’s reluctance to permit international scrutiny. That imputation of an international scandal – perhaps even of a crime – of such terrible proportions should become pinned on a quartet of amino-acid residues is one of the more bizarre facets of the pandemic. Perhaps it’s more productive to view the FCS as a window not on the pandemic’s origins but on the virus itself: how it works, and how we might foil it.9